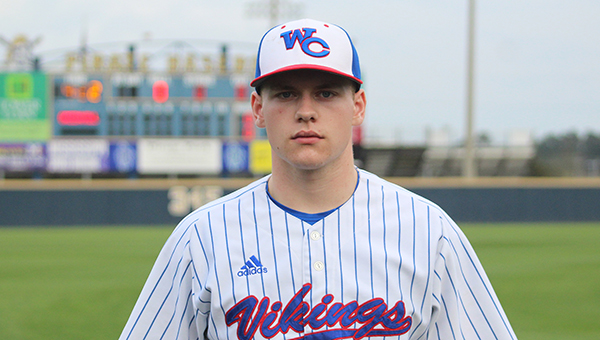 Warren Central’s Sean Daily hit a two-run home run in an 8-5 win over Tupelo on Saturday in Game 2 of their Class 6A playoff series. The Vikings swept the best-of-three series 2-0 and advanced to play Desoto Central in the second round.

A day after it was victimized by a walk-off hit, Tupelo tried to make some magic of its own.

Warren Central was having none of it.

Sean Daily homered, Wesley Ricks went 2-for-4 with two RBIs and two runs scored, and Warren Central held off a comeback bid by Tupelo to win 8-5 on Saturday and complete a two-game sweep of their first-round Class 6A baseball playoff series.

Warren Central (19-9) advanced to the second round for the fifth consecutive season and will face Region 1-6A champion Desoto Central in a best-of-three series beginning Thursday at Desoto Central.

Tupelo (14-10) failed to get past the first round of the playoffs for the first time since 2012, when it did not reach the postseason.

Warren Central won Game 1 of the series 4-3 on Friday, on a walk-off RBI single by Hank Holdiness. This time it was the Vikings who nearly let a lead slip away.

Warren Central scored twice in the top of the fourth inning and twice more in the fifth — the latter on a two-run home run by Daily — to go up 6-1.

Carson Sorrell hit a solo homer and Peyton Puckett a two-run shot, however, as Tupelo chopped the deficit to 6-5 in the sixth inning.

The Vikings answered. Ricks hit a two-out RBI single and then scored on a double by Alan Kivett in the top of the seventh to give them some more breathing room. Clayton Thurman then retired the side in order in the bottom half to close out the game and the series.

Thurman pitched 2 2/3 innings of relief and allowed two runs on one hit and one walk. He struck out two. Starting pitcher Vantrel Reed allowed three runs and struck out four in 4 1/3 innings.

Puckett was 2-for-4 with a double, home run and two RBIs for Tupelo, and Mark Scruggs singled, walked and scored two runs.