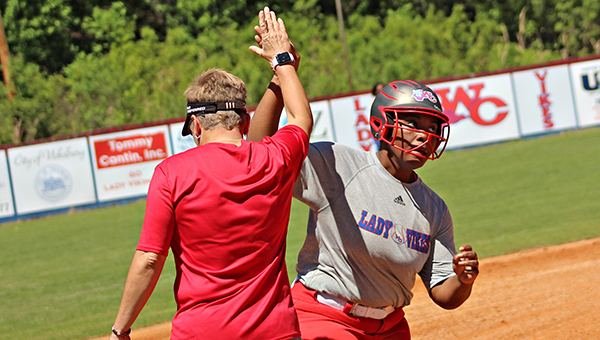 It was a good indicator of what kind of day it was for Warren Central when the Lady Vikes ran themselves into an odd inning-ending double play, shrugged it off and laughed about it a few moments later.

Kelsey Lockridge hit a two-run home run, Laura Reagan Logue and Kayleigh Beard each drove in three runs, and the Lady Vikes crushed Oxford 13-3 on Saturday in Game 1 of a first-round series in the MHSAA Class 6A softball playoffs.

The Lady Vikes collected nine hits — Logue had three, and Beard and Kaylee Hoeft had two each — and scored in four of the five innings on their way to a run-rule win.

“This is the team that I love to play for. These are the coaches I love to play for. We’re all excited. We love every minute of it when we play like this, and you can tell the difference in the team,” said Logue, who went 3-for-4 with three singles, three RBIs and two runs scored. “When we are having a hard time in the middle of the season and we come to the beginning of the playoffs and play like this, it’s just amazing. It’s a good feeling.”

Game 2 of the best-of-three series is Monday at 2 p.m. at Oxford. If a Game 3 is needed, it will be played immediately afterward. The winner of the series advances to play defending Class 6A champion Desoto Central in the second round.

Based on Game 1, Warren Central’s biggest challenge might be bottling up the energy, enthusiasm and good vibes for 48 hours until it can get on the field again to close out the series.

“You have to hope that seeing the way they played today will carry over,” Warren Central coach Dana McGivney said. “It’s a little bit harder. You have to ride three hours on a school bus. But I definitely think they’ll come ready to play on Monday.”

Oxford (5-12) scored the first two runs of the game, when Chrystian Scruggs blooped a two-out single to shallow right field in the top of the first inning. After that, it was all Warren Central (10-15).

A misplayed fly ball with two outs in the bottom of the first set up Lockridge’s home run to left field that tied the game. A single by Logue and two errors by Oxford followed, bringing in two more runs and setting up an RBI double by Beard that put Warren Central ahead 5-2.

Another error, three walks, and a two-run single by Annalyn Nevels in the second inning extended the lead to 9-2 and the game was over in all but name. The Lady Vikes tacked on two more runs in the fourth inning and two in the fifth to end the game by the mercy rule.
Oxford committed four errors in the game, and pitcher M.J. Jones walked six batters. Three of those were intentional walks to Lockridge, who scored twice off of them and was on base again when Logue’s two-run single ended the game.

Oxford lost for the fifth time in six games.

“I’m disappointed in the effort. I can handle the errors. I can’t handle lack of effort, and they gave a huge lack of effort. I don’t think we ever got off the bus,” Oxford coach Tabitha Beard said. “I don’t shake it off. You have to put it in the hands of your girls and hope they show up to play. Hope they believe in themselves as much as I believe in them and know they can.”

Warren Central freshman Maddie McAdam turned in one of her best outings of the season. She threw a five-inning complete game, only walked one batter, allowed three hits and struck out six. Two of the three hits she allowed were in the first inning.

“I thought she pitched really well. She and Annalyn (Nevels) are both ninth-graders and they’ve been our go-tos since the playoffs last year. They stepped up and into a starting role and did a good job,” McGivney said.

One of the few hiccups for Warren Central came in the second inning. With runners at second and third with one out, Beard hit a slow dribbler in front of the plate. Jones fielded it and flipped to catcher Addie Shorter, who tagged out Kallie Page. Then, as McGivney prepared to argue the call on the close play at the plate, Nevels rounded third a bit too far and was tagged out after a brief rundown for an inning-ending double play.

By then the Lady Vikes had a seven-run lead and confidence that they could get more, and McGivney was able to brush aside the odd string of events that on another day might have been disastrous.

“We just really felt like we could hit their pitcher and they didn’t have anything out of the ordinary offensively that we couldn’t handle,” McGivney said. “Even when we made a mistake — and I didn’t think it was that much of a mistake — you just have to fight back from that and keep playing hard, and I felt like we played well today.”