Saltillo sweeps Gators in first round of baseball playoffs 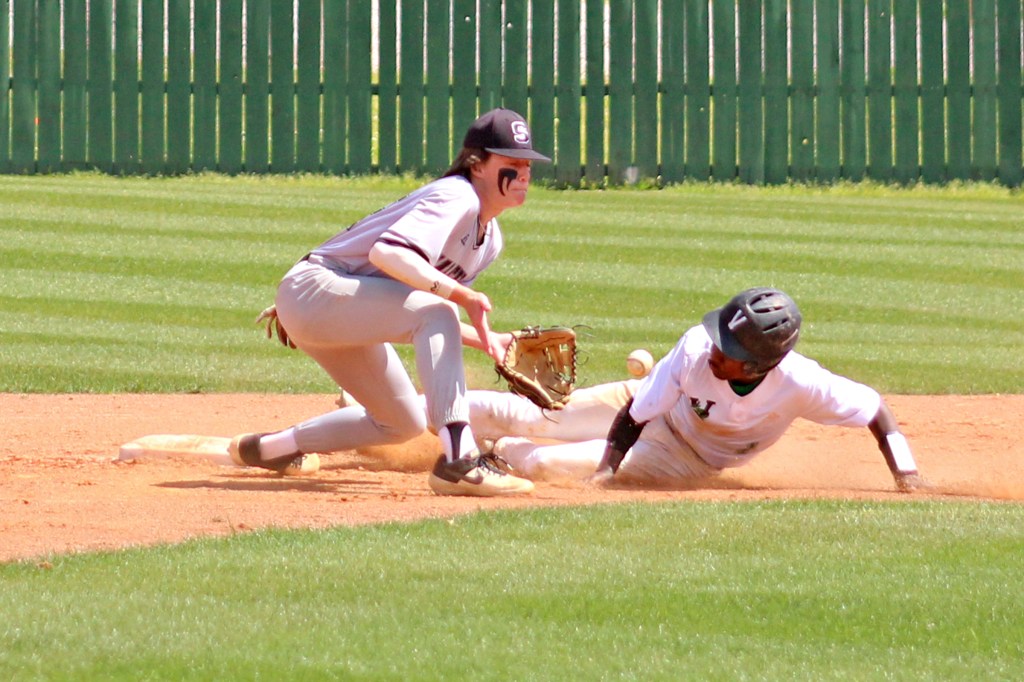 For the Vicksburg Gators, playing with a lead was like playing with a live wire. It was exciting for a moment, but once the first mistake was made all of the fun went away.

The Gators scored twice in the second inning to take an early lead against Saltillo and generate dreams of an upset in Game 2 of their Class 5A playoff series on Monday. Then a few errors led to some unearned runs, Saltillo batted around in three of the last four innings and scored all of its runs from the fourth inning on in beating Vicksburg 13-2 at Bazinsky Field.

“It’s a heartbreaker for me, because at the beginning of the game we score two runs and we’re up. We go three down the next inning, put a little bit more pressure on those guys, and for us to just fizzle out over one error — one error turned into six within an inning and led to eight runs — that right there is a hard pill to swallow,” Vicksburg coach Antonio Calvin said.

Vicksburg (7-14) finished its season on a four-game losing streak and continued a long stretch of playoff futility. The Gators have lost 11 consecutive playoff games since 2014, and have not won a series since 2008.

Vicksburg has not finished with a winning record since 2012. Calvin, who completed his first season as coach, was optimistic about the future nonetheless.

“For this program, this is just another step in the right direction. But, at the same time, that’s not very comforting for me because I want to win. I was hired here to win, to turn this around, to turn it into a winning program again,” Calvin said. “And so for me not to be able to do that my first year, it’s a heartbreaker. In reality I understand it’s a lot of things here that we have to do away with. A lot of bad habits, a lot of bad attitudes, just a lot of bad baseball in general. I did it at Callaway. I did it at Greenville. So this is just another stop along the way. We’ll get it done.”

Vicksburg did not get a hit in a 10-0 loss in Game 1, but got off to a pretty good start in Game 2. Pitcher Dylan Whitfield did not allow a hit in the first three innings, and in the bottom of the second the offense came up with a big inning.

Two walks and a hit batter loaded the bases for Wayllon Ramo, who sliced an opposite-field double down the right field line to bring in two runs and put the Gators ahead 2-0.

A baserunning error on a wild pitch led to Ramo getting picked off of second, however, and Saltillo got out of the inning without further damage. A similar mistake took another runner off of second base in the third inning and cost the Gators another scoring opportunity.

And, from then on, Saltillo got rolling. John Bucy Long led off the top of the fourth inning with a single for the Tigers’ first hit, went to second base on an errant pickoff throw, and scored on a double by Charles Miller.

Miller eventually scored when the cutoff throw on a flyout was misplayed, and a third error allowed two more runs to score as Saltillo jumped ahead 4-2.

The bad inning deflated the Gators instantly. Saltillo added five more runs in the fifth inning, one in the sixth and three in the seventh. It batted around in all of those innings except the sixth.

“We’ve been in a lot of games this season, and the same stuff shows up time and time again. A lot of that is due to an ingrained mindset, a way of doing things in which they feel is right because they’ve always been allowed to do it. So for us, now it’s like pulling teeth or playing tug of war to get them to understand that this is not baseball. It’s a knockoff brand of it,” Calvin said. “You see flashes of what it could be, but then all of that fizzles and dissolves due to lack of discipline, mental toughness and experience.”