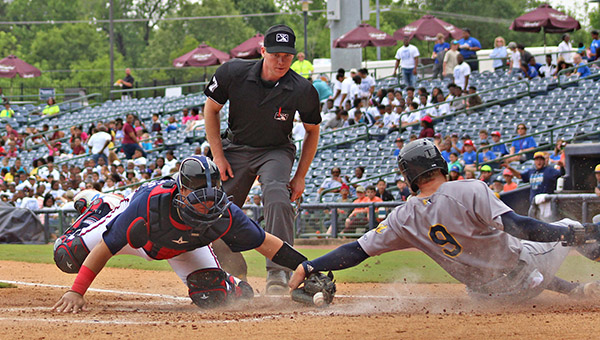 PEARL — Some late-inning magic had netted the Mississippi Braves two wins in their series with Montgomery.

Some mid-inning misery cost them one on Tuesday.

Brett Sullivan homered, and Tristan Gray went 2-for-4 with two doubles and four RBIs as the Montgomery Biscuits beat the M-Braves 7-3 in a matinee at Trustmark Park.
Montgomery evened the series at two games apiece, with the fifth and final game set for Wednesday at 6:35 p.m.

Montgomery (10-8) scored six of its seven runs between the third and fifth innings, and none after the fifth. Sullivan hit a solo home run in the fourth inning, while Gray drove in two runs with a double in the third and one more with another double in the fifth.
Gray also drove in a run with a sacrifice fly in the top of the first inning.

The M-Braves (9-8) had won two consecutive extra-inning games against the Biscuits, but couldn’t muster another late rally. Connor Lien hit a two-run home run in the fourth inning — a 443-foot shot to left center that cut it to 4-3 — but the Braves did not score again after that.

Montgomery pitchers Arturo Reyes and Kenny Rosenberg combined to retire 11 of the last 12 batters they faced. Reyes escaped a minor jam in the fifth inning and made it through the seventh to earn his third win of the season. He allowed three runs on five hits and one walk, and struck out six.

Rosenberg did not get a save, but did finish up with two innings of perfect relief and had two strikeouts.

M-Braves starter Ian Anderson (0-1) allowed six runs before being pulled after Gray’s second RBI double made it 5-3. Anderson, the No. 3 prospect in the Atlanta Braves organization, walked five batters, struck out three, and gave up six hits.

Mississippi’s bullpen only allowed one run in five innings, despite surrendering six hits.
Lien’s home run was his fourth of the season. He also drove in a run with a fielder’s choice in the second inning and finished with three RBIs. Jonathan Morales had two hits.

The M-Braves went 0-for-7 with runners in scoring position.