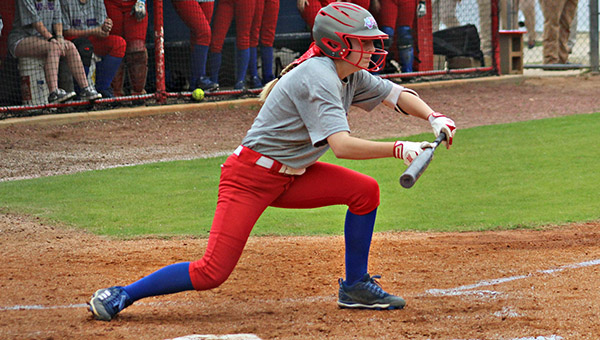 Even in the elation of its first-round sweep of Oxford, the Warren Central Lady Vikes were well aware they’d face a stiff challenge the next time they took the field.

It’d be nice if it wasn’t quite this stiff.

Sterling James racked up 12 strikeouts while throwing a two-hit shutout, Kaitlyn Bednarek drove in three runs, and defending Class 6A champion DeSoto Central routed the Lady Vikes 12-0 in Game 1 of their second-round series.

DeSoto Central can clinch the series by winning Game 2 at home on Wednesday. If a Game 3 is needed, it will be played immediately after Game 2.

DeSoto Central (16-3), however, seemed to make a statement that it is intent on making short work of the Lady Vikes (11-16), who swept Oxford in the first round and then had the misfortune of drawing a state championship favorite 24 hours later.

James struck out 10 of the first 12 batters she faced. The only interruptions in that stretch came from Kallie Page, who was hit by a pitch in the second inning, and Kelsey Lockridge, who singled for Warren Central’s first hit with two outs in the fourth.

James only threw 65 pitches in five innings, and 54 of them were strikes. She got plenty of run support, too.

Bednarek hit a sacrifice fly in the first inning for the Jaguars’ first run, and two more scored in the second on an error and an RBI single by Hannah Randl.

Then, in the third inning, the Jaguars put the hammer down by scoring nine runs to blow it open. Four errors by Warren Central helped things along, but Bednarek delivered a two-run double and Callie Newman followed with an RBI single. An RBI single by Raegan Stafford capped things off and made it 12-0.

Starting pitcher Brianna Daughtry allowed five hits in two innings, and only three of the seven runs she allowed were earned. Daughtry walked one batter.

Maddie McAdam pitched the last three innings and gave up five runs, only two earned, on four hits and one walk. She had one strikeout.

Kayleigh Beard had Warren Central’s other hit, a single with two outs in the bottom of the fifth inning. James got the next batter, Kayleigh Karel to foul out for the final out, as DeSoto Central closed out the game via the 10-run mercy rule.

Newman finished with two hits and one RBI for DeSoto Central. Stafford was 2-for-3 with one RBI and two runs scored, Molly Beth Ferguson singled, walked and scored twice, and Arin Dale scored two runs.

The winner of this series will go on to play either Madison Central or South Panola in the Class 6A quarterfinals beginning on Friday.