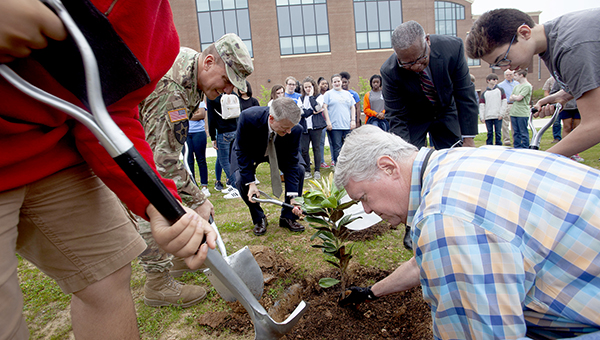 Hartfield, an endangered species biologist for the U.S. Fish and Wildlife Service, was the featured speaker at the U.S. Army Engineer Research and Development Center’s first center-wide Earth Day observance.

Cynthia Banks, Earth Day program coordinator, said she got the idea for the ERDC-wide observance from the theme of this year’s observance, “Protecting Our Species.”

“Protecting the species is something ERDC does,” she said, adding she began working on the program in October.

Besides Hartfield’s presentation, a magnolia tree was planted at ERDC headquarters and booths were setup in the headquarters’ atrium by different ERDC branches, the National Park Service, Mississippi Wildlife Fisheries and Parks, and several environmental groups.

Students from the Academy of Innovation attended listened to Hartfield and toured the exhibits, students planted flowers in the center’s pollination garden, and college students also participated in programs.

The river, Hartfield said, was a great place to celebrate Earth Day because of the work done by government and nonprofit agencies to restore and improve its ecosystem.

“It was done quietly with no fanfare and at minimal cost to the American taxpayer,” he said. “We’ve got a good story to tell here.”

As the world’s population continues to grow, areas like the Mississippi Valley could play a significant role in helping meet the needs of future growth that could exceed 10 billion by 2050, he said.

That plain, combined with similar areas in Louisiana and Arkansas, provides crops like corn, soybeans and cotton that can be shipped across the world using the Mississippi.

He showed a slide of towboats pushing barges on the Mississippi, adding that at one time he questioned using the river to ship goods. “But when you look at it, you can ship a ton of cargo (on the river) more efficiently than any other way. It’s twice as efficient as railways, which are supposed to be the benchmark.

Having the ability to efficiently move cargo can help alleviate crises across the world, “But we have to do it with the ecosystem in mind.”

Hartfield said over the years, engineering has reduced the Mississippi’s floodplain, but has helped reduced the need for dredging, and can be used as a conservation tool.

He discussed projects have helped increased the growth of endangered species like the pallid sturgeon, the interior least tern and the pocketbook mussel, which are now growing and beginning to thrive. Also, migrating tropical birds are stopping to rest in the batture area of the levee system.

He said other changes and the cooperation of private organizations have helped make area accessible to endangered species.