Guild set to unveil ‘A Red Plaid Shirt’ next week 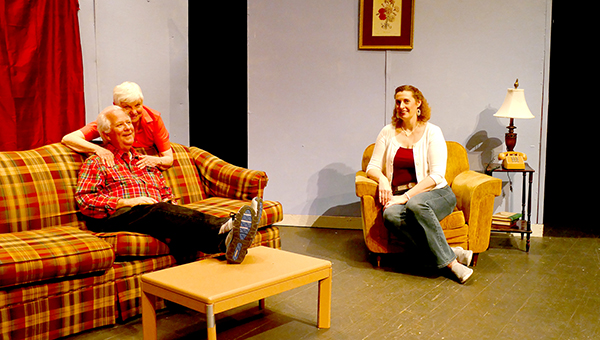 Mike calnan • submitted photo REHEARSAL: Cast members for the upcoming production of “A Red Plaid Shirt” rehearse Monday at the Parkside Playhouse Theatre. The comedy opens at 7:30 p.m. Thursday, May 2 and will run through the weekend at the theatre.

However, for Marty and Fred, figuring out how to spend their golden years is getting a bit convoluted.

Fortunately, the two friends have wives that aid their direction and all ends well in Michael G. Wilmot’s “A Red Plaid Shirt,” which will be presented by the Vicksburg Theatre Guild.

The play revolves around the two retired couples who will be played by Paul Ballard, Linda Hadala, Paul Bennett and Andrea Fairchild.

The show has a small cast, Shirley said, and without giving away too many details of the play, she said, the men eventually find themselves in a woodworking class at the high school from which Marty has retired.

Shirley said the comedy was to originally be performed last year, but because they only had a four-week window to prepare, they decided to wait, since one of the characters was is in almost every scene.

This would have been a lot of lines to learn in a short amount of time, she said, “And if we were going to do it we wanted to do a good job.”

While Shirley has been involved with the VTG in many areas that have included working with costuming, lights, props, sets and even acting, this will be her first time to direct a play.

She said Ballard had found the comedy and had mentioned it at a board meeting and suggested a novice take on the role of director.

“I thought about it and then said, ‘Why not.’ It’s a play with a small cast.”

Shirley said as a first-time director it has been helpful working with a seasoned cast.

“If I have any questions, I can get feedback from them and we have been able to feed off each,” she said.

Shirley added the cast has also been very patient and has answered a lot of questions for her.

“You just don’t realize what all goes into a play until you are in charge of it,” she said.

“A Red Plaid Shirt” will run at the Parkside Playhouse Theatre, 101 Iowa Ave.