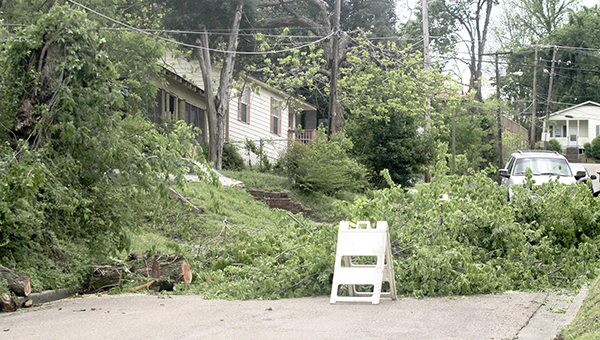 NO ACCESS: In this photo from last Friday, a tree continues to block Dot Street following two rounds of severe weather last week.

Street crews have moved from cutting and clearing trees from streets to removing leftover debris from roads and sidewalks as Vicksburg and Warren County begin the final steps to recover from a rash of tornadoes April 13.

“I’ve looked in all of the areas where we had trees down and wires involved with the trees, and the city is actively beginning to remove debris that is on the right of way, which includes the sidewalks,” North Ward Alderman Michael Mayfield said. “It seems all the power lines have been picked up, although I still see a few phone lines or cable lines that are still down. Entergy worked very hard (after the storms) to make sure they stayed on top of what was going on, and I think they did a good job.”

Mayfield said at least two crews are out on city streets trying to get the debris up.

“We ask people be patient; there’s a lot of debris out there,” he said.

He said city officials have not received any damage estimates, “But it could be, I think, quite high, because you had residential, commercial and industrial (damage).”

Warren County Emergency Management director John Elfer said most of the cleanup in the county is done “except on private property for the most part, crews are still working to clear the right of way, and we’re still working on a flood.”

He said information on storm damage has been sent to the Mississippi Emergency Management Agency, adding the final total showed 183 homes and 21 businesses and churches had storm damage.

Three EF-2 tornadoes hit Warren County April 13, with two touching down in Vicksburg and damaging homes and businesses along Pemberton Square Boulevard and some of the northern part of the city, and one on Sherman Avenue in the county.

The area missed a second round of damage when a line of severe thunderstorms passed through April 18. Another round of thunderstorms is possible for the area Thursday.