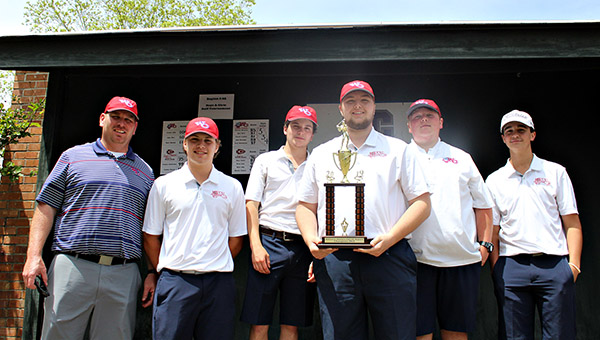 Consistency was the key for Warren Central at the Region 4-6A boys’ golf tournament.

The Vikings shot five scores in the 80s, just as they’ve done at nearly every tournament this season, for a team total of 334 and a nine-shot victory over Clinton Tuesday at Clear Creek Golf Course.

Clinton’s Hunter Hulsey took medalist honors by shooting a 76, but the Vikings took five of the next six places and won their second consecutive region championship.

“It shows that our boys program has come a good ways the last few years. We were struggling just to break the number and now we’re consistently in the 330s as a team and the kids are in the low 80s which is a good sign,” Warren Central coach Matt Williams said. “I’m very happy with this, to go back-to-back winning region is a huge accomplishment for us. For a long time we were struggling just to make the state tournament and now we’re going in as a region champion, which we can feel good about.”

Warren Central still has some work to do ahead of the Class 6A state tournament in two weeks. Despite the consistency, a score in the 325 to 335 range will probably only be good for a mid-level finish against the state’s best teams.

It does, however, provide a good baseline for what they can expect and a sense of where they can pick up a few strokes.

The state tournament is May 6 and 7 at Ole Miss Golf Course in Oxford.

“That is going to help. We know we’re consistent. But we definitely want to shoot better than we have,” said Reed Buys, who shot an 81 on Tuesday to tie teammate Taylor Lampkin for second place. “We haven’t been shooting bad at all, but we can definitely shoot way better. The mentality is the biggest factor for us.”

Williams said the goal is to finish in the top five.

“We’ve got a tough task. Our goal is to get in the top five. There’s a lot of things these kids can work on to get us there. We’re excited about where our program is headed to,” Williams said.

For now, though, the Vikings get to celebrate a championship. After Buys and Lampkin’s 81s, Hartley Sullivan shot an 85, Zack Montpelier an 87 and Josh Hallberg an 89. The top four scores count for the team total.

The other two teams in the region, Greenville and Provine, did not compete in the tournament.

“We had some holes today that got us,” Williams said. “Hartley played as good as he could except for three holes and that’s where he lost his shots. Reed was the same way. Reed played very well on the front and on the back he struggled.”

In the girls’ region tournament, Clinton’s Haley Tatum took medalist honors with a 95, Parker Ainsworth finished second with a 99 and Cooper Welch shot 121 as the Lady Arrows took the team title with a 194 total.

Warren Central’s Leanna Goss and Anna Bull each shot a 104, and Macy Broome a 114. The top two scores count toward the team total in the girls’ tournament.

Although they didn’t win, Williams said he was happy with the Lady Vikes’ performance. The team lost three seniors from last season, including Karley Whittington who is now playing Division I college golf at Central Arkansas.

Warren Central will host the Class 6A girls state tournament next week, April 29 and 30, at Clear Creek.

“We lost the region this year, but that’s the best score we’ve had all year. They’re close to being under 100 and we knew this year was going to be a rebuilding year after what we lost with Karley, Mia (Wamsley) and Sydney (Stuart) last year,” Williams said. “We’re taking this as a learning experience, and maybe next year we can get back to winning the region. I’m very proud of the girls. They didn’t quit. They always have a smile on their face. They enjoy being out here. That’s what we were trying to get to with the girls.”