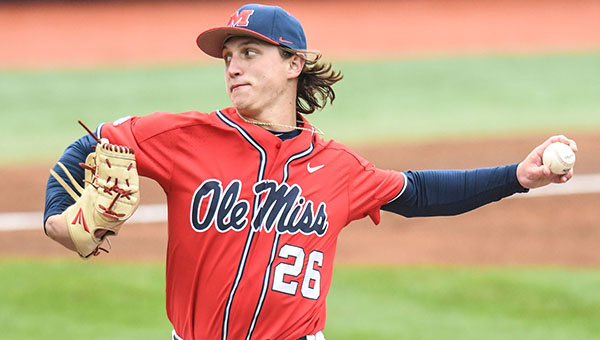 Baseball seasons are long and unpredictable enough that, at some point, almost every team and player goes into a slump.

The Ole Miss Rebels seem ready to end theirs.

The Rebels lost 8-1 to Mississippi State in the annual Governor’s Cup game Tuesday at Trustmark Park in Pearl. Although the game did not count in the Southeastern Conference standings, the Rebels haven’t been too hot in those lately, either.

Ole Miss (27-15, 10-8 SEC) has lost its last two SEC series and five of seven games overall. There’s still time to pull out of the slide — only two games separate the top six teams in the SEC Western Division — but they can’t afford to lose too much more ground as they head into a pivotal series with Texas A&M (29-12, 11-6).

The Rebels and Aggies begin the three-game set Thursday night in Oxford.

“It’s disappointing. We just haven’t played well these last couple weeks, collectively,” Ole Miss coach Mike Bianco said after Tuesday’s loss. “When the pressure got hot, we didn’t handle it. That’s not what you’re supposed to do with a veteran club. It’s disappointing.”

There are still four SEC series and 12 games left in the regular season, and Ole Miss does not appear to be in any danger of missing the conference tournament, although its NCAA Tournament hopes might get sketchy if the slump continues down the stretch.

Ole Miss is ranked 28th in the NCAA’s RPI rankings, but is 11th out of 14 SEC teams. That’s plenty good enough to make the NCAA Tournament if the season ended today, but with series left against Texas A&M (No. 13 in RPI), LSU (No. 20), Mississippi State (No. 12) and Tennessee (No. 7) there are plenty of chances for that ranking to move one way or the other depending on results.

For their part, the Rebels seem more frustrated than panicked. They are, after all, a team that won 25 of its first 35 games.