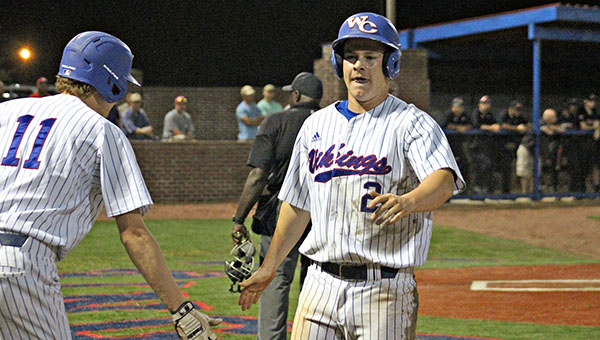 Warren Central has been preparing for this moment the entire baseball season.

Every top-flight opponent they’ve faced, every pitch, every big at-bat has led to this — a showdown with the defending state champs with the season on the line.

The Vikings will head north on Thursday for Game 1 of a second-round series in the MHSAA Class 6A playoffs against DeSoto Central. The Jaguars (26-2) are the top-ranked team in the state according to MaxPreps.com and looking for their third state title in five years.

Warren Central coach Conner Douglas, however, believes he’s got a team capable of taking down the king.

“We always talk about setting up a tough schedule and running into good arms so we get ready for these types of guys,” Douglas said. “They’re good on the mound. They’ve got two really good arms that are going to challenge us at the plate. The better part of us is that we handle velocity pretty well. I think we’re deeper than them on the mound, so if we can get to a Game 3 I like our chances.”

DeSoto Central has not lost to a Mississippi team this season. Its two losses came to Cullman (Alabama) and Buford (Georgia) at a spring break tournament in Hoover, Ala., in early March. It has won 20 games in a row since then.

DeSoto has four players hitting better than .400 — including Kamren James and Blaze Jordan, who have combined for 14 home runs and 54 RBIs — and a pitching staff with a cumulative 1.00 ERA. There are also 13 seniors and 10 juniors on the roster who were part of last year’s championship team.

Douglas, though, said that while the Vikings (20-9) face a formidable challenge, some of their strengths are well-suited to counter DeSoto’s strengths.

“Looking at the guys they have and the guys we have, I think we’re very similar,” Douglas said. “They have some guys that throw hard and we have some guys that throw hard. They’ve got some power in their lineup one through nine and we’re pretty good one through nine. Just talking with other coaches that have played them and us, they tell me we match up better with them than anybody because of the guys and experience we have.”

Warren Central is also battle tested. DeSoto Central will be the sixth of eight Class 6A region champions it has faced this season. Only six of its 29 games were against non-playoff teams, and three of those were against a winless Provine squad that finished fourth in Warren Central’s Region 4-6A.

“They won it last year so they’ve been there. One thing we’ve got going for us is they haven’t had a lot of pressure on them this year. They’ve blown people out and haven’t had a lot of pressure put on them in tight ballgames. Since we have, hopefully that added bonus will be on our side,” Douglas said. “I’d rather get beat in February and March by a quality arm than come out right now and see this quality of guy. We’re prepared for it.”

Even the first-round series with Tupelo, which Warren Central swept in two games, was beneficial, Douglas added.

“It was big, not just for momentum but going to beat a quality team like Tupelo and the way that we did it. We’re going to use that to keep moving forward. It’s big for us to be able to take such a long trip because it’s very similar to what we’ve got coming up this week,” Douglas said.

Now the Vikings need to find a way to put it all together and take a big step — but far from the final one — toward ending a long championship drought.
Warren Central has not been to the state finals since winning the Class 5A title in 2001. It has reached the second round five years in a row, but only been to the third round once since 2005.

Douglas said competition has more to do with that than anything, and admitted this series will be as tough as it gets on that front. He also feels like he’s got a strong, experienced club that at the very least won’t go down without a fight.

“These are the same guys that have been in my lineup for three years. I don’t think it’s so much of a mental block as just running into a good ballclub,” Douglas said. “Obviously, DeSoto right now is probably a unanimous No. 1 in the state. They’re 26-2, they’re the defending state champion and they’ve blown people out all year. So I think our guys are looking forward to this series.”