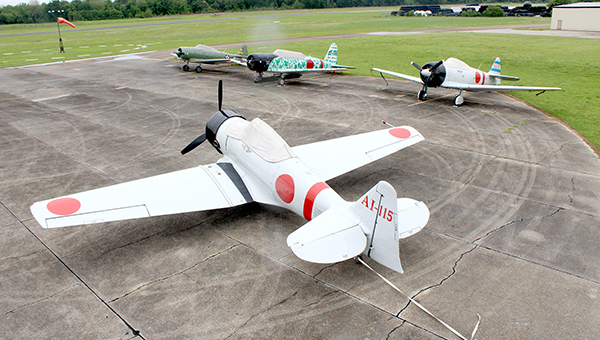 Two replica Japanese Zeroes, a “Kate” torpedo bomber, second from right, and an American P-36 Hawk sit on the tarmac at the Vicksburg Municipal Airport. The planes were on their way to an airshow in Goldsboro, N.C. (John Surratt | The Vicksburg Post)

Living and movie history landed at the Vicksburg Municipal Airport Thursday when six World War II-era Japanese planes flew in for a stopover and fuel on the way to an airshow in Goldsboro, N.C.

The planes, all owned by the Commemorative Air Force, are participating in “Tora! Tora! Tora!,” a recreation of the Japanese attack on Pearl Harbor on Dec. 7, 1941, at the Wings Over Wayne Air Show at Seymour Johnson Air Force Base in Goldsboro.

“We have three replica Zeroes, one ‘Kate’ torpedo bomber and one ‘Val’ dive bomber and an American P-36 ‘Hawk,’” said Commemorative Air Force spokesman Patrick Hutchin. The replica Zeroes were modified from AT-6 Texans.

All the planes, he said, were used in the 1970 film “Tora! Tora! Tora!” about the Pearl Harbor attack, and “Midway,” a sequel about the Battle of Midway.

The planes, Hutchin said, were part of a group of planes acquired and modified by Twentieth Century Fox for the film.

Several of the planes were later bought by a collector, who donated them to the Commemorative Air Force, which is based in Texas.

He said the planes are housed at several locations in Texas.

Hutchin said the Tora! Tora! Tora! program consists of the CAF planes, a pyrotechnic team and an announcer, who explains the program and tells the story of the Pearl Harbor attack.

He said the pyrotechnics team uses dynamite and gasoline to create the effect of bombs exploding.

“We don’t drop any bombs,” he said. “We fly over, and as we fly over the team creates the explosion. We do about 15 shows a year.”

He said the team was to arrive in Goldsboro Friday and give media flights from a private airport before doing the Saturday show.