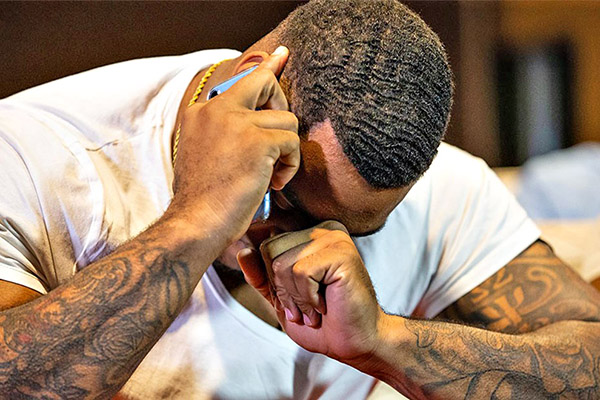 Tennessee selected Simmons with the 19th overall pick in the NFL draft Thursday even though a torn anterior cruciate ligament in his left knee puts his availability for the upcoming season in question.

Not even a three-year-old arrest and video in which Simmons was shown punching a woman could keep the Titans from selecting a player they considered one of the best in the entire draft.

“We’re excited,” Titans coach Mike Vrabel said. “To get this type of player and this type of person where we got him, we’re very fortunate.”

Simmons tore his ACL while working out in Florida in February. The Titans didn’t want to speculate Thursday how soon he might be available to play and whether he’d be ready at all this season.

“We’ll see how it goes when he gets in here, not to put a timetable on any types of injuries,” general manager Jon Robinson said. “He’ll get in here and start working with our training staff. Whatever timetable that is for him to get back out there, when he’s out there, we feel he’ll really make an impact.”

The knee isn’t the only concern surrounding Simmons.

He also was arrested in 2016 following a fight in which he was seen on video punching a woman. He was found guilty of malicious mischief and pleaded no contest to a simple assault charge. Mississippi State suspended him for one game.

Simmons said the woman that he hit was arguing with his sister. Simmons said he initially tried to break up the fight until “I just let my emotions take over.” He added that it was “kind of one of those things (where) I wasn’t even thinking about the consequences.

“I wasn’t raised like that,” Simmons said. “I grew from that a lot. It was one of those things — I have a son myself — and I wouldn’t want my son hitting a woman. I regret it. I’m just grateful to get this opportunity. It’s like a brand new start in life.”
Robinson and Vrabel said they were reassured after talking to Simmons and various Mississippi State officials.

“I’ll say this,” Vrabel said, “there are bad people, and there are good people who make mistakes — bad, horrific mistakes. You can fix mistakes. You can’t fix bad people. … This is a good guy, this is a great guy who made a horrific mistake. He lives with it every day of his life. I’m very confident, as is Jon, that he will make everyone here proud.”

Robinson cited his own track record since taking over as the Titans’ general manager in 2016.

“We haven’t brought bad people into this organization since I’ve been here,” Robinson said.

“It did not take me long to see that this young man had an incident when he was in high school,” Strunk said. “We all can look back on our lives in high school and wish we’d done things differently, but you can talk, ‘I’m sorry,’ the best thing is that he’s lived the life of, ‘I’m truly sorry and I’m going to be a good man.’ That made it really easy for me to become comfortable with Jeffery. We’re getting a great football player. That goes without saying. But we’re getting a great man.”

As Strunk spoke on his behalf, Simmons bowed his head with tears running down his cheek.

“I made that mistake and I regret it,” Simmons said. “Just to hear her say all that, I’m grateful. The key word she said was trust. I tell her in front of you guys, she can trust me. I won’t let her down. I won’t let any one of these guys down.”

The Redskins traded up to get Sweat. They sent their second-round pick, 46th overall, and a 2020 second-rounder to the Indianapolis Colts to get back into the first round.

Sweat fills a void for Washington after pass-rusher Preston Smith left for Green Bay in free agency. He slipped amid medical concerns about a heart condition that he said was misdiagnosed and then called normal by Houston Texans doctor James Muntz.

Coach Jay Gruden said the Redskins believe Sweat is healthy, and they have a motivated player in their second first-round pick. The team picked Ohio State quarterback Dwayne Haskins at No. 15.

“They definitely got a winner in me,” Sweat said. “I’m more motivated than ever.”
A third Mississippi State player, safety Johnathan Abram, also was picked in the first round. He was taken at No. 27 by the Raiders.

Abram is a versatile safety capable of playing both in the box or deep. He gives the Raiders insurance if they decide not to pick up the fifth-year option on 2016 first-round safety Karl Joseph, who is entering the final year of his rookie deal.

“I’m going to try to get him to wear number 32 or 43,” Gruden said, referring to the numbers Tatum and Atkinson wore. “He’s like one of the old-school safeties. He’s a physical, sideline to sideline tackling machine in college. I hope it continues here.”

It was the first time in school history that Mississippi State has had three players selected in the first round of the draft. The three selections also tied Clemson and Alabama for the most this year.

Simmons was the first first-round pick from Mississippi State since the Philadelphia Eagles took Fletcher Cox 12th overall in 2012.

“I am so proud of Jeff, Montez and Johnathan for achieving their lifelong dreams,” Mississippi State head coach Joe Moorhead said. “With a school-record and nation-tying three first round picks, tonight is a validation that Mississippi State is a place where you can develop as a player and as a person to reach the ultimate level in our game. Those three men are going to be terrific teammates and leaders in the locker room. They are well prepared for lengthy NFL careers, and they are winners.”