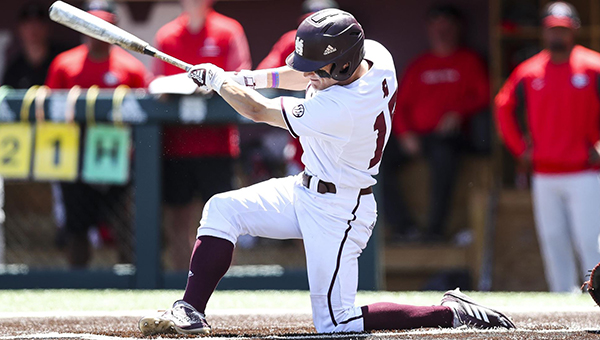 STARKVILLE — Jake Mangum wanted wins for Mississippi State more than he wanted to set the Southeastern Conference’s career hits record.
On Saturday, he got both.

Mangum went 3-for-5, scored a run and drove in another, and moved into first place on the SEC’s career hit chart as Mississippi State beat Georgia 9-3 Saturday at Dudy Noble Field.

Mangum came into the game needing two hits to pass LSU’s Eddy Furniss for the record. He led off the bottom of the first inning with a single to tie Furniss, and then singled again in the second inning to pass him.

Mangum added one more hit, an RBI single in the seventh inning, and is 6-for-9 in the first two games of the series between top 10 teams. Mississippi State (35-9, 12-8 SEC) has won both of them, and three games in a row overall.

“Man, it has been a long, long ride. It has flown by. It seems like just yesterday, I was a freshman just trying to get in the lineup. It is crazy how quickly time goes by over the last four years,” said Mangum, a senior center fielder from Pearl. “A lot has happened over the course of those four years, a lot of ups and downs. Things you didn’t expect happened, but you just have to stay in the moment. I can’t tell you how happy I am just to get it over.”

Mississippi State’s sophomore trio of Tanner Allen, Rowdey Jordan and Jordan Westburg each increased their reached base streaks to 12 games. Allen walked and scored a run, Jordan homered, was hit by a pitch and scored twice, and Westburg had a pair of hits — including a double — with a run scored and an RBI.

Another sophomore, Justin Foscue, hit his 12th home run of the season as part of a 3-for-5 day. Foscue added a pair of singles, drove in three runs and scored twice.
Mississippi State will go for the sweep of Georgia (33-11, 13-7) Sunday at 1 p.m.

“It’s huge. Three games ahead of Georgia in a series, or one game ahead. We talked about it last weekend when we were 0-2, how big it was to get one. This week we’re 2-0 and how big it is to get one,” Mississippi State coach Chris Lemonis said of the finale. “It’s all about the next game for us. We’ll have to come out and be ready to go. It should be a great atmosphere, it’s going to be a good game. They have some really good arms sitting over there ready to go, so it will be a battle.”

It was the second walk-off win for Ole Miss in the series. Dillard got the game-winning hit the first time, a two-run single in the 11th inning of Thursday’s opener that gave the Rebels a 5-4 victory.

Dillard also hit a sacrifice fly in the fourth inning of Saturday’s game to bring in the first run for the Rebels.

Middle Tennessee took a 3-0 lead into the fifth inning, but Southern Miss scored in four consecutive innings to take control.

Bowen tied the game with a two-run triple in the sixth inning, and then scored the go-ahead run on a single by Matt Wallner.

Bowen also hit a two-run home run as part of a six-run rally in the seventh inning that put Southern Miss ahead 10-3. Wallner made it back-to-back home runs with a solo shot, and Matthew Guidry had a two-run triple earlier in the inning.

Wallner and Erick Hoard had three hits apiece for the Golden Eagles. Guidry was 2-for-4 with two RBIs and two runs scored.

Cody Carroll (2-0) pitched seven innings of relief to earn the win. He allowed one run on five hits, walked none and struck out three.

Southern Miss has won seven consecutive games and five league series in a row. It will go for the sweep Sunday at 1 p.m.