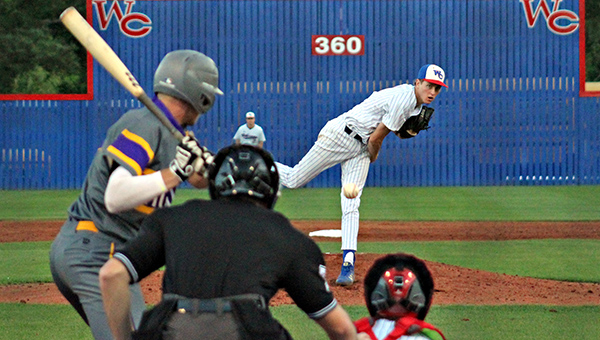 If Game 1 was a missed opportunity for Warren Central, then Game 2 of its playoff series against DeSoto Central — or at least parts of it — was a long, waking nightmare.

Runs, mistakes and bad breaks collected neatly into piles for future examination, all while nudging the Vikings’ season closer to extinction. This went on for the better part of an hour until the tone got a little happier, but by then it was far too late.

DeSoto Central, the defending Class 6A champion, had slipped in and out of Vicksburg and the Vikings’ lives to claim a 14-7 victory and a two-game sweep of this second-round series.

DeSoto Central (28-2) advanced to face either Madison Central or Oxford in the third round. Warren Central ended its season with a 20-11 record.

“It’s definitely disappointing. I did not want it to end like this,” said Warren Central first baseman Sean Daily, who went 2-for-4 with a solo home run. “But these boys poured their heart and soul into this program every day. That’s not how it was meant to be, but we can live with it because we know we gave it our all. We hustled. We played good. We just didn’t come out on top.”

After two scoreless innings, DeSoto Central turned those mistakes and bad breaks into two run-filled rallies that put the game out of reach.

With a runner on second base and one out in the third inning, DeSoto’s Kyle Booker hit a ground ball to third baseman Shane Lewis. Lewis spied Mac Sims off the bag at second and fired that way to try to throw him out. The tag was a split-second late on a very close play, leaving two runners on, and the floodgates soon opened.

Blaze Jordan doubled down the third base line to bring in the game’s first run. Two batters after that, Hunter French plated two more with a single and later in the inning Connar Gardner did the same.

At the same time, Warren Central pitcher Farmer Abendroth started struggling with his control. He retired six of the first seven batters he faced, but walked one, hit two others, and uncorked a wild pitch in the third inning. When he did put it over the plate, the Jaguars hit it. They had five hits in the inning.

When it was all over, nearly 30 minutes later, DeSoto Central had sent 12 batters to the plate and led 7-0. Abendroth threw 44 pitches before finally escaping it.

“We had a couple of things that I disagreed with that really hurt us. We’re out of that inning and those seven runs don’t score if they make the right call. I hate to say it like that, but that was crucial,” Douglas said, referring to the play at second base. “We couldn’t get out of it. We kept making good pitches and they kept spoiling them and then they’d get a hit. Just tip your hat to them at the end of the night. We couldn’t get out of that inning and we couldn’t make the bleeding stop.”

Warren Central got one run back in the bottom of the third on an RBI infield single by Alan Kivett, but DeSoto Central answered right back with four more in the fourth. Kamren James had an RBI triple and scored on a single by French to key that rally, which put the Jaguars ahead 11-1.

French finished the game 3-for-5 with three RBIs and three runs scored.
It wasn’t until the fifth inning, facing elimination via the 10-run mercy rule, that the Vikings got back on their feet and at least managed to have some fun as their season wound down.

Vantrel Reed blasted a three-run home run over the left field wall, and then Lewis went back-to-back with a solo shot to right field. The Vikings also had two runners on in the sixth and a chance to perhaps make a game of it, but did not score.

“The game got out of hand, but we kept competing. We were three outs away from being 10-runned, and they fought back and got us right back in it. We were one swing away from cutting it to two runs right there in the sixth,” Douglas said. “It’s tough. I’m proud of these seniors. They mean a lot to me and this program. They built this program back to where it was. They got better every year and they’re going to be a bunch to miss.”

One of those seniors, Daily, went out with one last big bang.

In the dugout before his at-bat Daily had boldly predicted a home run and, on the third pitch he saw, he backed up his big talk. Daily crushed it over the center field fence, a no-doubt home run in his final high school at-bat.

It didn’t make a difference in the outcome. DeSoto Central had scored three times in the top of the seventh to once again put the game out of reach, and Daily’s home run only cut it to 14-7. Honeycutt walked two more batters and then got out of the jam before the Vikings could start to even think about a most improbable comeback.

Still, the home run was one last memory to cherish, something Daily and his teammates will remember long after the score of this game is forgotten.

“It’s great. Something I’ll remember for the rest of my life, for sure,” Daily said. “But I’ll remember these teammates more. I’ve been playing with most of them since I was 5 years old. They’re going to mean more to me than that home run ever will. I love everybody on this team with all my heart. Coaches and all.”