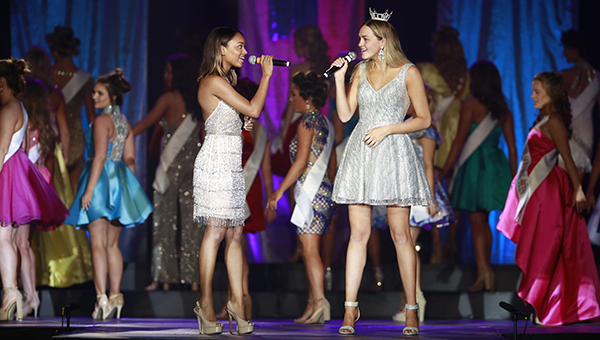 As in the previous preliminary competition that was held earlier in the day, there was a tie during Saturday night’s event.

“It was overwhelming to be named a preliminary winner and it’s just amazing and an honor. I almost started crying” Rhett said, after her named was called.

“I was having to hold back the tears,” she said.

Rhett sang “Somewhere Over the Rainbow,” from “The Wizard of Oz.”

While she takes no formal vocal lessons, Rhett did say she had been practicing the song “a lot” with her local pageant director.

Johnson, who is from Madison, said it is the on-stage question phase of the competition that makes her most nervous.

“I seem to always pull through though and give a decent answer, she said, adding she was “surprised and ecstatic when she heard her named called as one of the preliminary winners.

Granberry said she was also surprised when she heard her name called as a preliminary winner of the evening gown and on-stage question phase of the competition.

“But I am really excited because I know I spent a lot of time formulating my words and trying to become a successful speaker.”

Granberry said she has been working with an interview coach to prepare for the pageant.

Thirty-five contestants are competing for the title of Miss Mississippi’s Outstanding Teen. The final competition and crowning will be held at 3 p.m. Sunday and the top 10 finalists will be named.