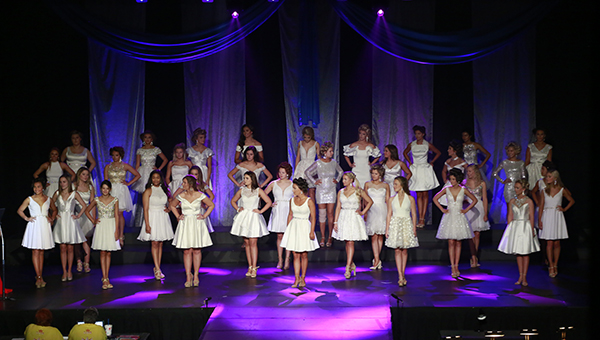 Contestants practice during a dress rehearsal Saturday before the first preliminary of the Miss Mississippi's Outstanding Teen Pageant at the Vicksburg City Auditorium. (Elijah Baylis/ Special to the Vicksburg Post)

The first round of preliminary competition for the Miss Mississippi’s Outstanding Teen Pageant got underway Saturday afternoon at the Vicksburg Convention Center.

Rhett wore a pale blue gown for the competition and said she knew it was the one when she saw it.

“I feel like when you find your evening gown, you just know it is the one because you have that gut feeling, and it helps you show that confidence and helps you feel like the best,” she said.

And for her on-stage question, which dealt with the effects of social media, Rhett said she just took a second to take in the question and know what they asked.

“Then I just gave the best educated answer I had,” she said.

“I think I chose the perfect song,” Granberry said. “I knew I wanted to do something fun and upbeat and get everybody excited about being here.”

Granberry said, to prepare for her performance, she would practice her dance every day.

“Before school, I would go into the volleyball facility and I would run my dance at least two times and then work on all of my tricks,” she said.

For her vocal performance, McCarter chose to sing “Colors of the Wind” from the Disney movie “Pocahontas.”

“I just love this movie and I chose this song because not only is it a really great song, but it also speaks to how we need to take care of the world,” McCarter said.

Singing since she was a little girl, McCarter, like Granberry, said she spent many hours preparing for the talent phase of the competition.

Thirty-five contestants are competing for the title of Miss Mississippi’s Outstanding Teen. The second preliminary competition is set for 7:30 p.m. Saturday.

The competition will resume at 3 p.m. Sunday, where the top 10 finalists will re-compete and one of them will be crowned the 2019 Miss Mississippi’s Outstanding Teen.