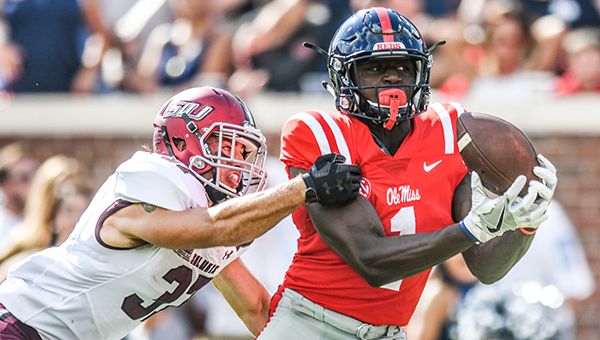 Ole Miss wide receiver A.J. Brown (1) catches a touchdown pass against Southern Illinois last season. Brown was selected by the Tennessee Titans in the second round of the NFL draft on Friday. (Bruce Newman/The Oxford Eagle)

NASHVILLE, Tenn. (AP) — Mississippi State was one of the stars of the first round of the NFL draft, when a school-record three players were selected.

Day two belonged to its rival to the north.

It’s only the second time in the common draft era that began in 1967 that Ole Miss has had four players selected in the first three rounds. The last time was in 1968.

The Ole Miss crop also made for a record-breaking draft for Mississippi as a whole. Mississippi State offensive lineman Elgton Jenkins was picked by Green Bay in the second round Friday, giving the Bulldogs four selections in the first two rounds.

The eight combined picks are the most ever from Mississippi colleges in a single draft. The previous record was six, done in 1985 and 2000.

Two of those eight went to the Tennessee Titans. They took Mississippi State defensive lineman Jeffery Simmons in the first round, and Brown with the 51st overall pick on Friday.

Titans coach Mike Vrabel said Brown made a strong impression during his visit with team officials.

“You just got a sense he was a serious, professional football player,” Vrabel said. “It seemed like he wasn’t about the glitz and the glamour. He kind of just sat down and talked. It felt like we were having a conversation with a guy that was already a pro football player in just his maturity level and how he approached his daily routine, the game, how he practiced, how he prepared.”

Brown said he had a pretty good idea the Titans were interested in him.

“This was one of the teams I thought was going to take me,” Brown said. “I thought a little sooner, but God works in mysterious ways.”

Brown’s fellow Ole Miss receiver, Metcalf, was forced to endure a wait far longer than he expected to hear his name called. He had been projected as a possible first-rounder, but instead was picked by the Seattle Seahawks with the last pick of the second round, No. 64 overall.

“That was the first time my phone had rang, so just to have a phone call was amazing. I’m just blessed to be part of the organization,” Metcalf said.

The eye-popping numbers made up for his mostly pedestrian numbers last season at Ole Miss and concerns about his limited route-running ability.

He played in just seven games due to a neck injury and had 26 receptions and five touchdowns in his limited action.

“My life has changed by people taking notice of what I’ve been able to do with my body, my numbers. It’s time for me to show the football player that I am,” Metcalf said.

Earlier, the Carolina Panthers traded up 10 spots to No. 37 in the second round to get Little, a 6-foot-6, 325-pound left tackle who was a first-team All-Southeastern Conference selection last season to protect quarterback Cam Newton’s blind side.

“I take pride in keeping people safe,” Little said. “And I’m going to keep him safe.”

Panthers general manager Marty Hurney said he felt the need to trade up to get a left tackle because they were “flying off the draft board” and Carolina needed to fill that spot before they were all gone. Hurney believes Little has a good chance to come in and compete to be the opening day starter at left tackle.

The move was costly for the Panthers, who gave up their own second round pick (No. 47) and an early third round pick (No. 77) to Seattle to move to get Little. But Hurney said the team couldn’t wait any longer.

“We really liked Greg and we had really good grades on him,” Hurney said. “There was a run on tackles and we didn’t think he had any chance to get to us (at No. 47).”

In the last 960 snaps the last two seasons, Little has only allowed 26 quarterback pressures.

The final Ole Miss player selected was Knox. The Bills gave up their two fourth-round selections, 112th and 131st overall, in a trade with Washington to move into the third round and take the tight end with the 96th overall pick.

Knox is listed at 6-4 and 254 pounds, and was limited to 39 catches for 605 yards in 18 games for Ole Miss. Bills general manager Brandon Beane believes Knox was under-utilized at college, and that he has the potential to play a larger role in the passing game.