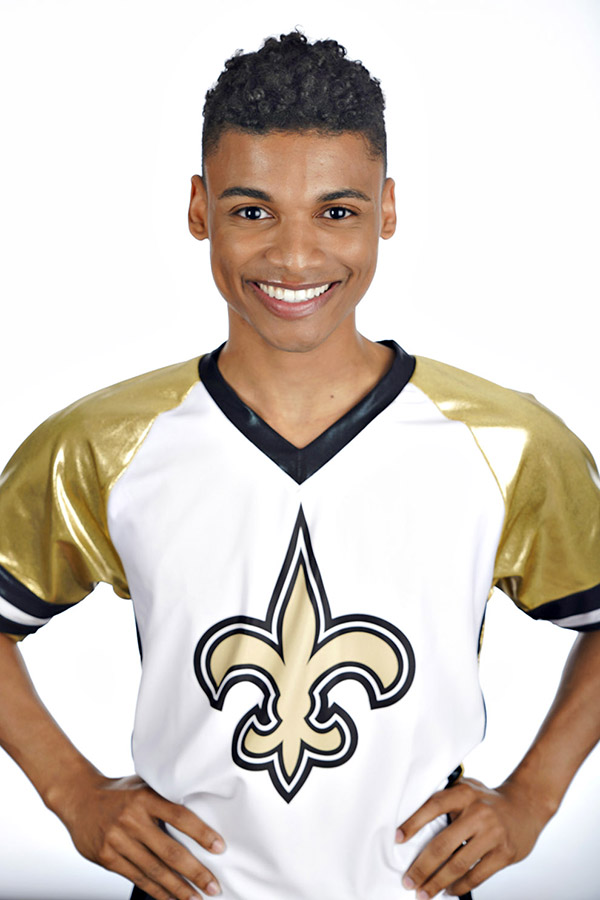 Dante Sanders spent the morning checking the time, and then a nervous few minutes checking his e-mail. A lifetime of preparation, weeks of hard work, and hours of nervous waiting hinged on the news that message contained.

It turned out to be great news. The 24-year-old Vicksburg native had made it to the big time as one of the newest members of the New Orleans Saints’ Saintsations cheerleading squad.

Sanders is among the first men to make the team. This will be the second year the squad has included male cheerleaders.

“I couldn’t even process it. I’m still trying to process it. But just to see my name on that roster and that list felt like a culmination of all the years of cheerleading and dance classes and hard work and dreaming, and everything I had worked for went into that very moment when I saw my name on that roster,” said Sanders, who now lives in New Orleans. “It’s amazing. It’s exciting. I feel so blessed and I feel so honored. Being able to represent Vicksburg, being able to represent Mississippi is an honor for me within itself, and I hope to make everybody proud.”

Sanders has been involved in cheer, dance and gymnastics — the three primary athletic components of high-level cheerleading — since he was a child. He was on the cheer squads at Warren Central and St. Aloysius, and then at East Mississippi Community College.

Sanders was a dancer in the Miss Mississippi Outstanding Teen Pageant, which led him to take dance classes, but until recently there were no opportunities for male cheerleaders in the major professional sports.

“I think it was just female dominated. Just like cheerleading in high school and college, you see more females than you do males. I think just the way that our world is progressing right now, women are getting in male-dominated things and men are starting to progress into female-dominated things,” Sanders said. “I think it’s about inclusiveness and just doing what you love. Guys can dance, too. Maybe one day we’ll see some females out there on the football field. It’s all about the way our world is moving.”

In the NFL, the world started moving in a different direction in 2018. The Los Angeles Rams and the Saints became the first two NFL teams to have male cheerleaders on the sideline. That opened up an opportunity for Sanders that he never thought he’d get.

“I’ve been a cheerleader for as long as I can remember, but I never would have thought I’d have the opportunity to do this, of course,” he said. “When I was in high school and even my first two years cheering in college there weren’t any males who were pro cheerleaders in the NFL or the NBA. So I never thought in my wildest dreams this would be an opportunity that I would get.”

It was an opportunity he had to work for, though.

Sanders started the tryout process by attending a Saintsations workshop in March. There, the hopefuls were introduced to the team’s dance style and a couple of routines.

The next step was the tryouts themselves. More than 120 men and women started the weeklong audition process that ended with 32 of them on the squad. Sanders said there was no set quota for the number of women and men that made the team.

During auditions, the cheerleaders had to prove not only their ability to perform dance and cheer routines, but also were tested on football knowledge, interviewed several times, and involved in photo shoots.

Sanders said he had an idea of what to expect going in and was well-prepared for it.

“I knew some veterans who were part of the team, so I got with them and had them groom me and help me. I trained with them leading up to tryouts, and that was very beneficial also,” he said. “These were girls that had been on the team for three years plus, so I really trusted them to lead me in the right direction and they did.”

The first two waves of cuts during tryouts were simple. Sheets of paper with all of the names were posted at the site, and those who advanced to the next round had their names highlighted. The final selections were informed via e-mail the day after training camp ended.

That made for a long night for Sanders.

“The finals were Thursday night and by Friday at noon was when they sent us the e-mail and we knew who had made it. Of course you can imagine I was on pins and needles from Thursday night through Friday afternoon. I could not function,” Sanders said. “They told us it would be around noon, but even having that time made it more nerve-wracking because by noon I was going to know if all this hard work has paid off.”

It did, of course. Sanders got the e-mail and confirmation that he will be part of the Saintsations’ 2019 squad. The next few weeks will be filled with more training and meetings, leading up to the start of training camp in late May.

Beginning this summer, Sanders and his teammates will make appearances at various functions around New Orleans as they prepare for the upcoming NFL season.

Sanders wasn’t yet sure what his assignments will be. Different parts of the squad perform at different times of games, and are split up to be in several locations in and around the Superdome on game days. Right now, he really doesn’t care. He’s simply fired up for the chance to live out a dream.

“It feels amazing. It’s indescribable. Last year was the first year they had males on the team, and it’s such an honor to be on the second team. It’s really good to be a part of this movement. It feels great,” Sanders said. “Performing at an NFL game, whether it’s on the field or sidelines, or in Champions Square, just to say that you’re a part of a major team in the NFL as a cheerleader or performer, that’s the best feeling for me.”