Lady Vikes look for progress in Class 6A golf tournament 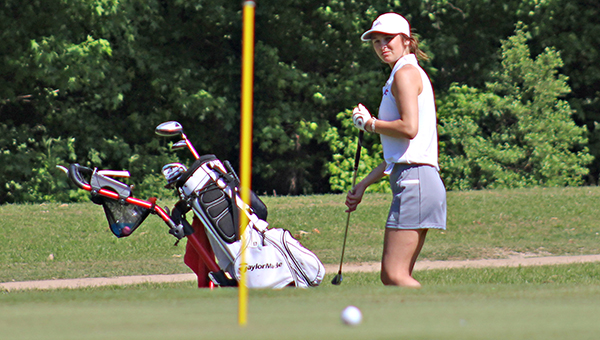 Warren Central’s Anna Bull watches her chip shot approach the hole on No. 11 Monday during the first round of the MHSAA Class 6A state tournament at Clear Creek Golf Course. (Ernest Bowker/The Vicksburg Post)

Warren Central was in a familiar environment, but unfamiliar territory, Monday as the MHSAA Class 6A girls state golf tournament got under way at Clear Creek Golf Course.

After six straight years of finishing in the top four, including one state championship, this year’s rebuilt team — all three of its top players from that run graduated — was not expected to contend as the tournament returned to Clear Creek for the fourth time in seven years, and contend they are not.

Anna Bull led Warren Central’s trio of juniors with a 106, Leanna Goss shot a 112, and Macy Broome a 122. The top two scores count for the team standings, leaving the Lady Vikes with a score of 218 that was 55 shots behind first-place Ocean Springs heading into Tuesday’s final round.

“It’s very weird. I’ve been blessed that I was spoiled for six years with the crew that graduated last year. We went runner-up for the state championship my first two years, and then we never finished out of the top four,” Warren Central coach Matt Williams said, before adding that he was still proud of his current team. “So it’s weird, but to see the girls are not quitting, they’re still trying to get better and still have the goal to break 100 tomorrow, so that’s what we’re hoping for.”

Hancock’s Katelyn Altese was in first place in the individual standings after shooting a 73. She had a four-shot lead over Harrison Central’s Paige Gibson and a five-shot edge over Starkville’s K.B. Hobart. Ocean Springs eighth-grader Avery Weed shot an 80 and is also in the hunt. 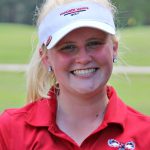 “I hit good iron shots on the par-5s and was really sticking to my game plan,” said Altese, a freshman who finished fifth in last year’s state tournament. “I’m just going to stick to my game plan, play my shots, and just improve what I can do from today. It’ll be fun to play friends.”

In the team standings, Weed’s 80 and Jolie Hughes’ 83 gave Ocean Springs a team total of 163. That was one shot ahead of Hancock, which added a 91 from Peyton Russell to Altese’s low round for a 164.

Warren Central, though, was not among them.

The Lady Vikes lost their top three seniors from a season ago and have had a bigger goal of breaking 100 in most rounds than winning tournaments. Their 218 team total on Monday was 14th out of 16 teams, ahead of only Clinton (232) and Pearl (242), and just behind George County (214).

Williams was happy that the Lady Vikes finished ahead of Clinton, which beat them in the Region 4-6A tournament last week. Clinton got rounds of 115 from Haley Tatum, 117 from Parker Ainsworth, and 126 from Brooke Thompson.

Williams was also happy with the general attitude shown by his players. Despite finishing way back in the standings, he said they’ve taken it in stride and shown a desire to improve rather than getting frustrated.

“Our girls know what the course is going to be like tomorrow, and that’s all three of their goals is to break 100,” Williams said. “We’re finding little things in our games as a team. We beat Clinton today. They beat us in district and we came back and beat them today. So it’s going to be fun.”

Another goal, he added, was to use this tournament as a springboard for next season. Playing in a big, multiple-day tournament like this one will offer plenty of lessons to that end.

“We played probably about as good as we could, with young, inexperienced golfers who are learning how to score. Scoring is probably the biggest thing. Not losing shots on mishits or missed putts when you shouldn’t lose them,” Williams said. “That’s what the girls have to learn. That’s the difference, a lot of times, between the mid-90s and being in the 100s, is the shots you don’t think about. I think they’re finally getting better at that.

“We knew going in that we were going to use all this as experience, so we’re taking it,” Williams added. “We were lucky enough to get it here at home. Next year they can use what they’ve learned here by having to play three days in a row in a different environment. It’s a tougher environment out here.”