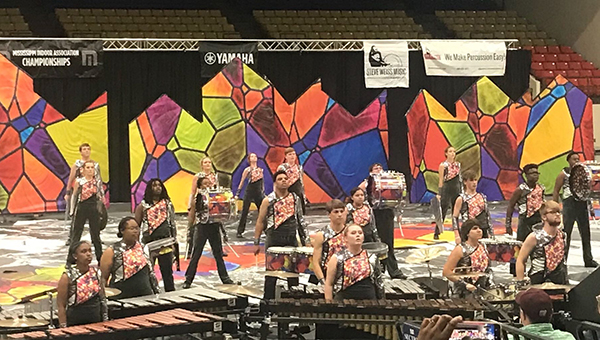 Members of the Warren Central Indoor Percussion perform during the Mississippi Indoor Association State Championships. The event was held March 29 and 30 at at Jackson State University. (Submitted)

It was a devastating blow at last year’s World Championships for the Warren Central High School’s indoor percussion team.

Due to a 10-point penalty during the World Championships, the group was taken out of contention for the semifinals and possibly finals

But with grit and determination, the percussion group decided to take their defeat and turn it in to something positive. On March 30, during the Mississippi Indoor Association State Championships, which were held at Jackson State University, Warren Central Percussion won the first place trophy.

“It felt unreal,” Brandon Merritt, a senior member of the indoor percussion team, said, after hearing Warren Central’s named called as the top finisher in their category of the competition.

Madison Maynord, who is a high school junior and also a member of the group, said, “I felt this incredible rush of happiness and felt so proud.”

In 2018, the indoor percussion team had used glass mason jars during their season as part of their props for the show, assistant band director and percussion director Nathan Ball said.

They had used them all season and were never told it was not okay, he said.

That was until they got to the World Championships in Dayton, Ohio.

“Our circuit uses the same rules and by laws as WGI (Winter Guard International), the organization that runs World Championships, so the penalty should have been caught, assessed, and corrected well before we traveled to the World Championships,” Ball said.

But because no one had informed the group that it was against the rules to use any form of glass in a show, they were charged with the 10-point penalty.

“Out of 70 groups in our class at World Championships, we ended up 33rd,” Ball said, adding, there are 32 groups that make it to the semifinals and 15 who make the finals.

“Without our penalty, we were 14th and would have had a good shot at making finals. The penalty really hurt the group,” he said.

“I felt extremely disappointed — totally devastated. It felt like the year had been a whole waste of time,” Merritt said.

“The show had been very special, and I was so sad. We were all heart broken and wished we could have had a second shot,” Maynord said.

Nevertheless, Ball said, “The penalty lit a fire in the group (the following year) that we haven’t had before. The kids were eager to get better every single rehearsal, and it ended up paying off in huge way with the state championship win.”

And to make a statement after their loss, they decided to wrap this year’s show’s theme around what had hurt them last year.

“The show was entitled ‘In a Shattered Moment’ and was based on all things glass from shattered glass to stained glass. We played pieces by composer Phillip Glass, True Colors by Cindi Lauper, and other pieces that symbolized glass,” Ball said.

Throughout the season, Ball said, the students strived to make the show their own.

“It took on a new meaning because it was so personal to them,” he said.

The team is comprised of 50 members who are in the eighth through 12th grade, and Ball said they practice “roughly” eight hours a week. Competitions are held from November through April and the students from Warren Central typically compete in five-to-six competitions.

“There are two major sections in a typical indoor percussion ensemble,” Ball said, “The battery and the pit.”

Members in the battery play the snare drums, quad drums, bass drums, flubs, cymbals and it also includes the visual ensemble, which is comprised of eight dancers, he said.

During the production of the show,  battery members march around on a printed vinyl floor in custom uniforms performing high velocity drills, music and body choreography.

An indoor percussion performance usually last around five and half minutes and while that may not seem very long, Ball said, for members of the battery that means they are carrying a drum that weighs anywhere from 15 to 30 pounds.

“They are also playing that drum, remembering the directions you have to go, all while remembering to perform and connect to the audience,” he said.

Members of the pit, Ball said, are required to memorize five and a half minutes of music while also playing with four sticks at one time without looking down.

“This (an indoor percussion performance) is much more involved than your typical marching band show you would see on Friday nights. The shows are much faster paced with a more in-depth design,” Ball said.

And because the shows are performed in a gym, he said, the performer is much closer to the audience, making them unable to hide.

“They essentially have to learn how to combine theater with marching band. The mental and physical demand on the performers can be compared to running a marathon while taking the ACT,” Ball said.

The Warren Central Percussion has been competing in the state circuit since 2008 and this year’s win marks their second state championship. The first was in 2011.

In addition to Ball, directors of the group include Robyn Ball who serves as the unit director and serving as assistant directors are Brandon Pratt, Anthony Lane and Jermarcus Lloyd.