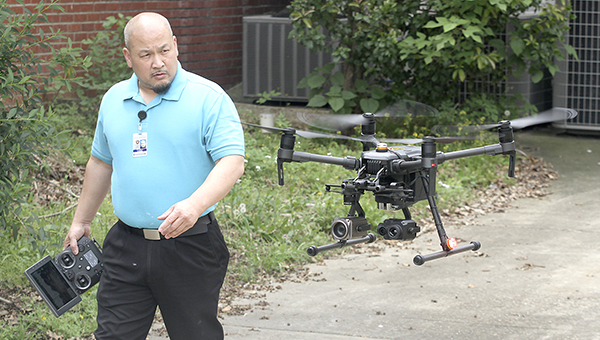 The Vicksburg Police Department’s ability to protect and serve the public has improved, thanks  to a 13.5-pound machine with a pair of very good eyes.

For the past 14 months, four police officers have been putting the hours in getting accustomed to operating the department’s latest crime fighting equipment, a DJL Matrice 210 drone; a machine powered by four propellers capable of lifting it to a point that can extend its search range to find a fugitive or a lost child.

It was a missing person case that influenced the department’s decision to get its drone, Capt. Mike Byrant said.

“The inspiration was in 2017, when an elderly man walked off from a nursing home and went missing,” he said. “The Rankin County Sheriff’s Office brought their drone over and used it to search the area. It was impressive.”

Bryant, Lt. Jeff Merritt, Lt. Leonce Young and investigator John Nguyen went to Natchez in 2017 to receive training and earn their Part 107 licenses from FAA to be able to fly the drone in the city. Since then, one of the city’s IT department and a VTV employee have qualified to fly the machine.

The department purchased a small drone in February 2018 for the officers to keep up their skills, and bought the Matrice in August 2018. Bryant said the officers have continued working with the drone, flying it at Halls Ferry Park, Sports Force Park, “Areas where we can get out and see the drone and get some good training.”

He said the drone will be used for the first time during Vicksburgfest May 10 and 11.

From the drone’s maximum allowed height of 400 feet, he said, its cameras are able to cover a lot of territory and with lenses can focus on a certain area.

“The flight training was hard,” Nguyen said. “You had to learn to fly the drone, and you had to be able to coordinate and communicate with the person operating the cameras so you’re both on the same objective.”

“This will be a big benefit for us because we can use it in so many different situations,” Bryant said. “Crowd control, search and rescue, searching for fugitive, and hazardous materials incidents.

“It’s another tool to help us do our job.”