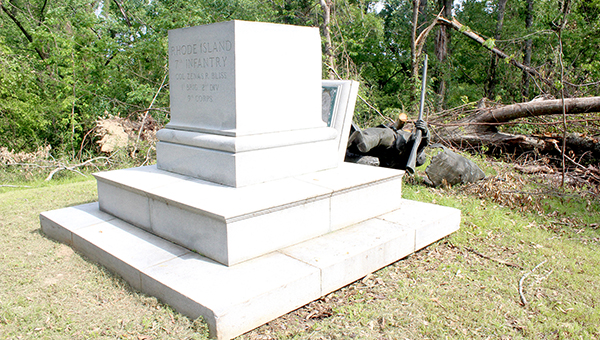 The statue of an infantryman who has picked up the fallen colors lies behind the base of the Rhode Island Memorial in the Vicksburg National Military Park. The statue, which topped the memorial, was taken down by a tree limb during an April 13 tornado. (John Surratt | The Vicksburg Post)

The Friends of the Vicksburg National Military Park and Campaign have begun a fundraising campaign to repair the park’s 111-year-old Rhode Island Memorial that was damaged by an EF-2 tornado that hit the park April 13.

Bess Averett, Friends executive director, said the cost of repairing the memorial is $15,000. “We had a donor come forward to pay half and direct a dollar per dollar match for any donor that comes forward and donates specifically for the cause,” she said.

She said the organization is also soliciting donations through emails to members and social media.

Erected at a cost of $5,000 on April 30, 1908, the memorial honors the 7th Rhode Island Infantry, the only regiment from the state that participated in the Vicksburg Campaign, and includes a bronze statue depicting an infantryman who has picked up the fallen colors.

The statue now lies on the ground behind the memorial.

“We think one of the tornadoes actually started exactly in that area, and the statue was completely lifted off its base and knocked down and a tree down beside him,” Averett said.

Vicksburg National Military Park Superintendent Bill Justice said he is not sure whether the tornado started in the park, but added, “there’s a heavily damaged area; a lot of trees down just behind where the Rhode Island Monument is.”

He said a large tree behind the monument went down during the storm, and one of one of its limbs caught memorial’s statue, pulling it off its pedestal.

“We have to do some work with that, and then we have to properly reset all of that and the statue on top of it.”

He said plans are to have workers from the National Park Service’s Historic Preservation Training Center in Maryland make the repairs. Workers from the center were in the park in spring 2018 working on the Mississippi Monument.

“They are the best at it in the entire country, so we rely heavily on them,” Justice said. He said park officials are working with the Friends to prepare for the repairs.

“It’s a pleasure to work with the friends of the Vicksburg National Military Park and Campaign on any project like this,” Justice said.