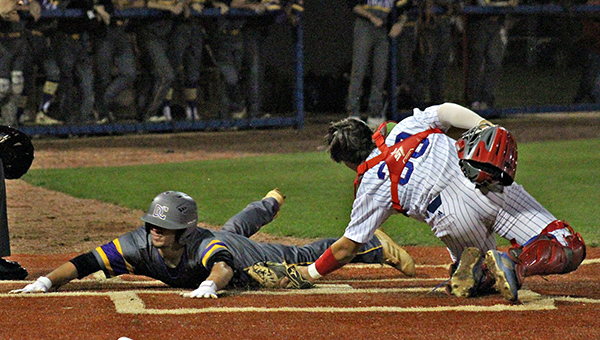 At the end of March, optimism was riding high that this might finally be the year that Warren Central’s baseball team broke through in the playoffs.

At the end of April, the Vikings were once again in a state of resigned acceptance that this was not, in fact, their year.

“We had a couple of key injuries and a couple of tough breaks in a couple of games. And then we ran into the favorite. It is what it is,” Warren Central coach Conner Douglas said. “It was a fun year. It was a fun three years with these guys. I’m just going to go home with the memories we had and get back to work.”

It’s not hard to pinpoint the moment Warren Central’s fade began. After beating Vicksburg High on March 25, the Vikings lost an eight-inning thriller to Region 4-6A rival Clinton the next night.

They came back to beat the Arrows 10-1 on the road later that week, but suffered a big loss in the process. Left fielder Chase Graham injured his knee in a collision with Clinton’s first baseman while trying to beat out an infield hit in the seventh inning.

Around the same time, pitchers Alan Kivett (elbow) and Farmer Abendroth (illness) were slowed by injuries.

Kivett was able to hit but didn’t pitch after March 14. Abendroth was effective at times, but didn’t earn a win in his last five starts. Graham was hitting .438 with 14 RBIs and 21 runs scored when he was injured, and did not play again.

Throw in a dose of shaky defense — the Vikings averaged two errors per game and only had one errorless game in their last 11 — and it was a recipe for an early playoff exit.

“It’s definitely disappointing. I did not want it to end like this,” WC first baseman Sean Daily said after Friday’s loss. “But these boys poured their heart and soul into this program every day. That’s not how it was meant to be, but we can live with it because we know we gave it our all. We hustled. We played good. We just didn’t come out on top.”

All of the factors for the Vikings’ fade were on display in the finale against DeSoto Central.

Abendroth, an LSU signee, pitched well for two innings before struggling with his control in the third. He walked one batter, hit two, uncorked a wild pitch, and also allowed five hits as DeSoto Central batted around. A botched fielder’s choice resulting in a close play at second base cost the Vikings another out, and the Jaguars wound up with a 7-0 lead.

A couple more hits and an error in the fourth inning allowed DeSoto Central to extend the lead to 11-1. Warren Central hit three home runs — one each by Daily, Vantrel Reed and Shane Lewis — to trim the deficit and make things mildly interesting, but never got closer than six runs.

“It was a tough night. They were a tough ballclub and you can’t make mistakes. You can’t have a couple of things go against you because they make you pay,” Douglas said. “I’m glad that our guys continued to fight and get us back in it. They’re just a good ballclub.”

As the game wound down, the Vikings loosened up and seemed to have a little bit of fun in the face of elimination. The home runs helped. Reed and Lewis went back-to-back in the fifth inning to keep the Vikings from being run-ruled, and Daily hit a two-run, two-out homer well over the center field fence in the seventh inning in his final high school at-bat.

“It’s great. Something I’ll remember for the rest of my life, for sure,” Daily said. “But I’ll remember these teammates more. I’ve been playing with most of them since I was 5 years old. They’re going to mean more to me than that home run ever will. I love everybody on this team with all my heart. Coaches and all.”

And now the Vikings will turn their attention toward 2020 as they try to figure out how to finally achieve that breakthrough season.

Ten seniors, including seven starters, are graduating. Lewis and Kivett will return, as will reliever Clayton Thurman (3-0, 3.67 ERA, 38 strikeouts in 34 1/3 innings pitched) to form a nucleus for 2020. Behind them, Douglas was confident the rising freshmen and sophomores would step comfortably into bigger roles.

“I think our coaches do a really good job of developing the younger guys and not just focusing on the seniors on the field. They’ve done a really good job with that and making these guys better and getting them ready,” Douglas said. “You want to reload and not rebuild, so that’s what our plan is next year and moving forward.”

Douglas admitted, though, that winning in Class 6A is never easy. In two of the previous four seasons Warren Central was knocked out of the playoffs by the eventual state champion. DeSoto Central is a favorite to win it all this year.

“We’ve got to replace a lot of guys,” Douglas said. “All of our seniors had significant playing time and were very key in the lineup or on the mound. It’s going to be tough to replace these guys. It’s time to go to work. Next man up. That’s what 6A is.”