New building at Hinds to be dedicated May 10 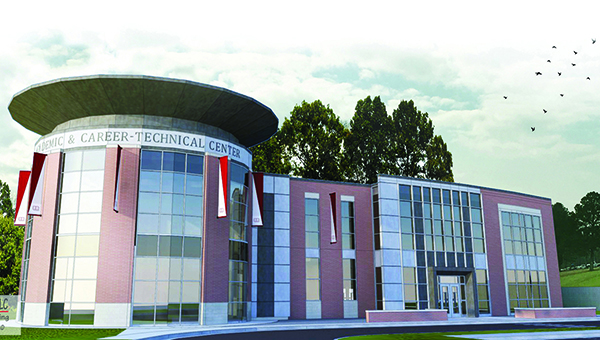 An artists rendering shows what the new George-Oaks Building, will look like. In addition to a number of classrooms and meeting room, the building will also be home to River City Early College High School.

A ceremony to name the new Academic and Career-Technical building at Hinds Community College Vicksburg-Warren Campus, plus several existing buildings and venues on campus is set for May 10 at 2 p.m.

Those to be honored at the ceremony include 10 individuals who have been closely associated with the origins and continued development of the campus. The dedication is open to the public and a reception will follow.

The two-story, 40,000-square-foot signature building is being named for Richard George, president of the Warren County Board of Supervisors, and Donald Oakes, former Vicksburg Warren School District superintendent and current member of the Hinds Community College Board of Trustees.

Warren County committed property tax dollars to help pay for the $13 million project. The building is also being funded by federal and state New Market Tax Credits through the Hinds Community College Foundation.

“The most impressive thing to me about Hinds over the years has been a realization that so many individuals had an affordable opportunity for an education that they otherwise would have foregone,” said George, a 1968 Hinds Community College alumnus. George is in his sixth term on the county board.

Oakes, a 1960 graduate of Hinds, won state titles in track and football in his days as a student-athlete. As an educator, his Warren County career spanned nearly four decades as a teacher, coach, assistant principal and principal at seven schools before he served as school superintendent.

“I’ve lived here all my life and am proud of how Hinds has allowed so many people in this area to participate in post-secondary education,” Oakes said. “The fact that my name will be recognized is a distinct honor for which I’m eternally grateful.”

The George-Oakes Building will include 10 classrooms, eight teaching labs, administrative offices, a downstairs training lab that holds about 50 participants and an upstairs multipurpose room that holds about 80 participants. The school district’s River City Early College program will be housed on the second floor.

The downstairs training lab will be named the Bruce Training Lab in honor of William F. “Sonny” Bruce, a former superintendent of Vicksburg public schools. Also in the new building, the upstairs multipurpose room will be named the Peets Multipurpose Room in honor of Charles Peets, who has served on the Vicksburg-Warren County Campus Advisory Board for many years and is currently serving as chairman.

Bruce taught shop in the city school system, before the merger of the city and county schools, and was instrumental in helping establish the Vocational-Technical Center, which was the beginning of the campus.

“He always felt like that was the way you could get ahead – by being educated,” said Barbara Applebaum, Bruce’s daughter and herself a retired educator.

“This campus has been wonderful for the community,” Peets said. “We’ve had great directors, and everyone at the campus cares about students. Hinds was good to the Peets family, and we’ve tried to reciprocate.”

“We’re so humbled and grateful to see our father recognized in such a special and enduring way by this building naming,” said J.E. “Brother” Blackburn Jr., his son and the president of Blackburn Motor Company, on behalf of the Blackburn family. “Hinds Community College plays an important role in the technical education of the citizens of this area. We are so proud that our father played a role along with many other dedicated people in its establishment.”

May, a local businessman and community leader, also served as chairman of the advisory board for the campus. Because of his business background, he “was involved in every level, and he was always available for advice on financial matters,” said former campus dean Joe Loviza.

A former church building that houses the nursing program on campus will be named the Gage Building for Howell “Hal” Gage, longtime Vicksburg and Port Gibson banking executive. Gage has served several times on the Hinds Community College Foundation board and, through his work with the Vicksburg Medical Foundation, has been instrumental in scholarship efforts and faculty development for Hinds Community College nursing programs.

“Our primary focus has always been to try to provide scholarships for students who are pursuing some medically-related field,” Gage said. “Hinds does a great job with the students it attracts and does a lot with the dollars it receives. It was easy to feel good about continuing and expanding the support the foundation could give the nursing program.”

The former Vicksburg Warren School District administration building, next door to the main part of campus and still owned by the school district, is being named the Pickett Building, for Robert Pickett, a former school district superintendent who was president of the Hinds Board of Trustees when he died in 2014.

A former auto mechanics building, now housing the criminal justice program, will be renamed the Hallberg Building after Walter B. Hallberg Jr.

“I’ve always loved Hinds because Hinds helps everyone,” said Hallberg, a former member of both the Vicksburg-Warren County Campus Advisory Board and the college Foundation board.

“He started the Student Loan Fund within the Foundation, with the first loan made in 1988,” Jackie Granberry, executive director of the Foundation, said of Hallberg. “And the loan program continues today, allowing students to receive additional help. He is a true gentleman who cares deeply for those around him.”

A multipurpose auditorium in the Loviza Building will be named the Chaney Auditorium in honor of 1950 alumnus Mark Chaney, former chancery clerk and state representative, who has served in leading roles with the Warren County School Board and, more recently, the Hinds Community College Alumni Association.

As vice president of the Warren County School Board, Chaney was instrumental in helping to secure the land, as an authorized bidder, where the Vicksburg-Warren Campus now sits. If not for that opportunity, “none of this would be here,” he said.

“You don’t do things like that for recognition. You do it for education, for something that would be worthwhile for the community,” Chaney said. “I’m certainly blessed to be considered for any honor that Hinds would bestow on me.”