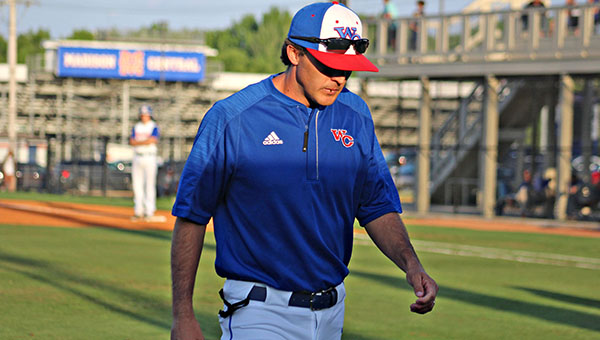 Warren Central baseball coach Conner Douglas walks back to the dugout during a 2018 playoff game against Madison Central. Douglas is leaving Warren Central after seven seasons as head coach and three more as an assistant, after his contract was not renewed for the 2019-20 school year. He was hired as the coach at Long Beach High School on Wednesday. (File/The Vicksburg Post)

After a successful seven-year run in which he turned the program into a perennial winner and spearheaded an overhaul of its facilities, Conner Douglas is out as Warren Central’s baseball head coach.

Douglas did not have his contract renewed for the 2019-20 school year. He said an issue with continuing education units that were denied by the Mississippi Department of Education, an expiring teacher’s license, and some bureaucratic red tape led to the decision.

“It’s hard to fathom going somewhere else every day. Every day at 1 o’clock my truck has come to this parking lot for 10 years. Every day I’ve stayed in Vicksburg, this has been home, and I’ve been welcomed by this community,” Douglas said. “It’s a lot of change and change is scary, but sometimes it’s a good thing. My family is looking to the next chapter. I’m not going to have any hard feelings.”

Douglas and his staff attended a coaches’ convention in Dallas last winter to earn continuing education units that are required to maintain a teacher’s license. The units were later denied by the state department of education.

With baseball season about to start, Douglas said the issue was put on the back burner while he worked on it through the spring. Douglas’ teacher’s license expires this summer and he expects to get it current by the end of May.

Last week, however, he was informed that since he didn’t yet have a license for next year, his job would become vacant and he would not be allowed to apply.

Both Warren Central principal Eric Green and Vicksburg Warren School District athletic director Preston Nailor declined to comment on the specifics of Douglas’ situation, since it is a personnel matter.

“They said you have to have a licensure to even apply. At this point it’s going to take me another three weeks to get it because they told me I had plenty of time. I’m on course to finish in the middle of May, but they’ve already posted the position,” Douglas said. “I could read the writing on the wall. I’m graciously leaving. It wasn’t my choice. I wasn’t out searching. But things happen for a reason. God has a plan, and that’s where we are now with it.”

Douglas did not have to wait long to find another job. Wednesday evening, the Long Beach School District announced that it had hired Douglas as the head coach at Class 5A Long Beach High School.

Douglas is leaving Warren Central after 10 years — the first three as an assistant — and in a pretty good place.

He led the Vikings to a 142-66 record and playoff appearances in every season since he took over as head coach. The Vikings won 20 or more games in three of the past four seasons, and he was The Vicksburg Post’s baseball Coach of the Year four consecutive years from 2014-17.

“It says a lot about our coaching staff and the job they do from the eighth grade up. When they get (to high school), they’re ready. It just says how much the staff works, how hard they work, and then what kind of players we have. They buy into the program and they work their tail off to get to where we are now,” Douglas said. “It’s become where 20 wins isn’t outrageous to think, where some years it was a long way from there. Everybody we play, we see their No. 1 (pitcher), so that tells you where the program is now. I’m not sure who will take over, but I feel like they won’t miss a beat.”

As much as his success on the field, Douglas’ tenure might be noteworthy for the transformation of Warren Central’s Viking Field into one of the state’s better baseball facilities.

An indoor hitting facility, new backstop and grandstand, a new scoreboard, a renovated field house and other upgrades were all built on his watch. Douglas estimated that more than $600,000 of the money for the various projects came from fundraising efforts and private donations.

“I don’t think there’s a place in the state, maybe the country, that has 80 sponsors on its wall at this level. It’s a telltale sign of our parents getting out to work and the community that gets out behind us,” Douglas said. “They love baseball in Vicksburg and they get behind these players. I’m excited for the future of Warren Central baseball. I’m proud to be their coach for 10 years.”

The Warren Central job opening was posted on the Mississippi High School Activities Association web site earlier this week. Nailor said he hopes to have a candidate ready for approval at the next school board meeting on May 23.

Whoever it is, Nailor believes he’ll be stepping into a great situation.

“In the next couple of weeks we hope to have somebody named so we can take them to the board at the end of this month. It’s been posted since Monday and we’ve had a pretty good crop of applicants at this point,” Nailor said. “In my opinion, this is a top 10 job in the state of Mississippi with everything that has transpired over the last five years. With the number of wins and losses, and the upgrades we’re about to get to our facility, this is probably one of the top jobs in the state of Mississippi.”