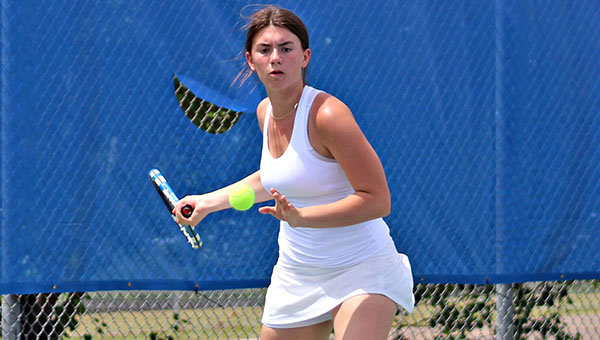 With faces sunburned red, the St. Aloysius tennis team got to lift a trophy plated in blue.

Piazza won in No. 1 girls singles. Natalie Jones, the No. 2 singles player, also reached the finals to give St. Al eight points in the team standings. Laurel Christian was second with six points, and Cathedral was third with five.

Teams get one point for each match they win, so getting several positions through to the state tournament should give the Lady Flashes a chance to win it all.

“We should do really well. If not win, then we should at least put up a good fight. I’m really excited, because the last time we went to state we didn’t have nearly as many people as we have now,” said Piazza, a senior who beat Cathedral’s Annalyce Riley 6-1, 6-0 in the finals and lost two games in her two matches. “This is probably one of the best teams we’ve had in a long time. Some of the older people have improved, and a lot of the younger people have stepped up.”

Jarratt and Chewning overcame their nemesis to win the South State title. They rallied after losing the first set to beat Park Place’s Reagan Savell and Maggie Savell 3-6, 6-3, 6-2 in the championship match.

The Savell sisters had beaten Jarratt and Chewning — the two-time state champions at the No. 2 doubles position — twice earlier this season.

“I was happy with the girls doubles No. 1 team. They had lost twice to that team this year. They worked hard, and the hard work they put in paid off,” St. Al coach Rick Shields said.

The Flashes had two singles players and two doubles teams advance to next week’s state tournament — the finalists in each bracket Wednesday moved on — to salvage something from the day, however, and give them a chance to still win the biggest prize they play for.

Finally, in No. 2 doubles, the Flashes’ tandem of Parker Brown and Carson Collier beat Park Place’s Eli Sykes and Matthew Barone in the final to win the South State title and advance to the state tournament.

Shields said he would have liked to have had the boys and girls both win the South State team title, but also had an eye on the bigger picture.

“You want both of them, because you want to get as many kids as possible to state. Then you have more chances to get points at state,” Shields said. “We worked hard this week on some things, and just playing in this atmosphere gets you ready for next time. It’ll be a little tougher at state. Each level you go, it’s always a little tougher.”