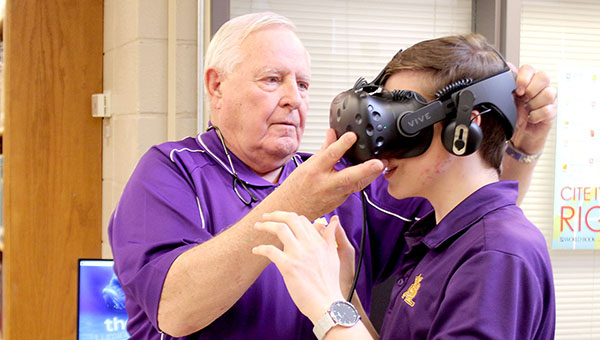 The staff at St. Aloysius is taking education to another dimension.

Virtual reality is a three-dimensional, computer-generated environment that can be explored and interacted with by an individual who becomes part of the virtual world or immersed within the environment and can manipulate objects or perform a series of actions.

Strickland said the school is committing $100,000 to install 25 virtual reality stations — enough to engage one class at a time. The program, he said, has been funded 100 percent through donations.

“We’ve had some parents and business people step up and say this is important; we’ll be more than happy to make an investment, and it’s an investment because we’re going to see a return,” he said.

The first phase of the program involves installing five stations to train teachers. “If we don’t train the teachers use it first, then it’s worthless,” he said.

Strickland said the decision to employ the technology came during a discussion of what the school can do to enhance education opportunities “for teachers to teach and students to learn.

“I watched a couple of children who had never really gotten engaged totally with what was going in the class, and watched them interact with the software with virtual reality,” he said.

“At that point, a light went off with me and we talked about it. If it could engage somebody who was not 100 percent in it, then we need to start looking at it.”

Realistically, he said, “Virtual reality is where the Internet was 20 years ago, but we thought this is something we cannot afford to do.

“There’s one other high school in Mississippi that’s gone to the extent we are in implantation, and that’s Jackson Preparatory School,” he added.

“We are in such a digital world now,” said Kristi Smith, Vicksburg Catholic Schools director of development. “Kids walk around with an iPhone in their hand and they’re constantly stimulated by what they see in front of them.

“Using virtual reality as a learning tool is a great way to engage kids who are being stimulated.”

Strickland said school officials are looking at introducing virtual reality first to the school’s science classes, which he said, “is the obvious place to start.

“If you went to any other school and asked them how they taught the heart in anatomy and physiology, they use a plastic heart. With virtual reality, you actually go inside the heart itself and look at it,” he said.

“You see the left ventricle, right ventricle; a working heart,” Smith said. “We had Dr. Paul Pierce put on the headset in February, and he performed a (simulated) heart catheterization in the room. It was amazing, and it’s really a great way to stimulate kids.”

Strickland pointed out another example.

“You go and teach world history; you look at a book, at a picture of the Roman forum, and it doesn’t tell you much except what you see. Suppose you had the opportunity to walk the Roman forum. Or walk the Great Wall of China; what you can do with it is limitless.”

Dawn Meeks, who teaches anatomy and advanced placement biology, said virtual reality “opens up a whole new level of learning, and I’m so excited we can offer this to our students. It’s going to be new tool.

“We’ll still teach things the traditional way, but it adds a whole new level of understanding that we didn’t have access before.”

Because students have grown up in a technological world and have Mac laptop computers in class, Meeks said, teachers can no longer stand in the classroom and expect to keep students’ attention. “They need more than a pencil and a piece of paper.

She recalled attending a virtual reality demonstration where she allowed some of her students to experience the effect.

“I was teaching the circulatory system and I had just finished teaching about the electrical conduction system in the heart, which is an abstract idea, the kids never get it; they don’t understand the heart runs on electricity.

“I thought, ‘You just spent two days trying to teach the anatomy of the heart. With this, I could do it in three minutes.’ I put the headset on the students and they went inside the heart and they said the same thing. It’s like being inside a video game.”

Strickland said he would like to see students be able to write their own codes and present their own virtual reality programs.

He said virtual reality “enables students to see what the teacher is teaching while they experience it. We want the students to really integrate that into what they’re doing.”