Residents turn out for National Day of Prayer events 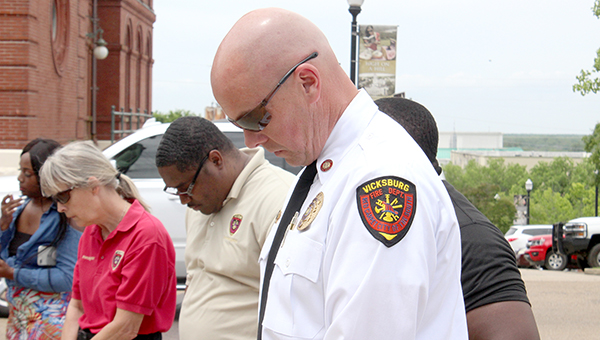 Thursday, more than 50 people gathered at the steps of City Hall and joined others in Warren County and across the country to take time to pray for the nation.

Recalling the April 13 rash of tornadoes that hit the city and county, Flaggs called Thursday a special day.

“We as Christians believe in God almighty who got up in three days for our salvation. I hope it’s understood, that in our house, we’re going to serve the Lord.”

City Hall was one of the locations in the area where people gathered to pray.

National days of prayer have been a part of America’s history since before the Revolutionary War, when the Continental Congress in 1775 asked the colonies for wisdom in forming the new nation. Abraham Lincoln called for a day of humility, fasting and prayer in 1863 during the Civil War.

President Harry Truman in 1952 signed a law calling for a national day of prayer, and in 1988 President Ronald Reagan signed an amendment to the law establishing the first Thursday in May as a day of national prayer.