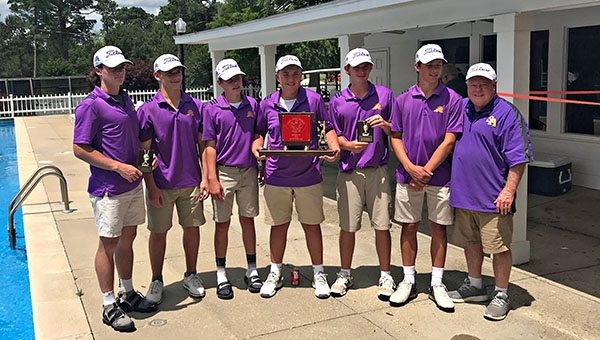 St. Aloysius only had to show up Thursday to qualify for the MAIS Class AAA state golf tournament.

It showed up, and showed out.

Wilson Palmertree and Phillip Upshaw both shot 82 to lead the Flashes to a second-place team finish at the Class AAA South State tournament at Laurel Country Club. The top four teams — and there were only four in the tournament — advanced to next week’s state tournament.

The state tournament is Monday in Cleveland.

Silliman Institute totaled 342 to edge St. Al by one stroke for the team title. Central Hinds was third in the team standings, with a 352, and Riverfield Academy was fourth with 383.

Silliman also had the medalist, Brett Baker, who shot an 80. Palmertree, Upshaw and Central Hinds’ Ryan Talley all shot 82 to tie for second place.

Trace Dailey shot an 89 for St. Al, and Josh Larsen (90), Davis Black (95) and Chase Tucker (97) rounded out the scoring for the Flashes. The top four scores count for the team score.

In addition to the teams that advanced, there were seven golfers competing for up to four individual berths. They needed to shoot 85 or better to qualify, and only two — Laurel Christian’s Wilton Moorer and Cathedral’s Chase Kaiser — did so. Moorer shot an 84 and Kaiser was right on the number at 85.