De’Jonae Curtis bakes for the enjoyment of giving back 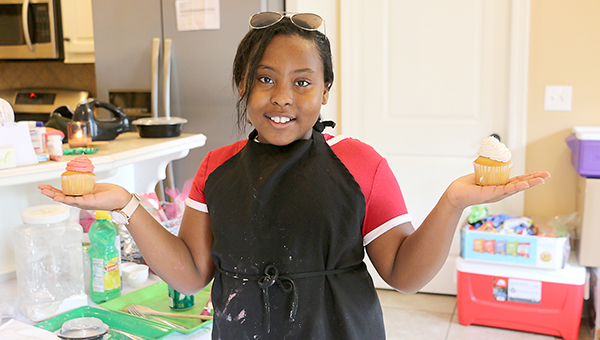 De’Jonae Curtis shows off just a few of the treats she creates as part of her baking enterprise. Curtis will officially open "Dee's Baby Cakes"at the Vicksburg Mall on June 26. (Photo by Terri Cowart Frazier | The Vicksburg Post)

Eggs, flour and just the right amount of sugar go into the confections De’Jonae Curtis whips up.

And to make the cakes and cupcakes she sells through her business even sweeter, she is giving part of the proceeds to both the Vicksburg Animal Shelter and the Vicksburg Warren Humane Society.

“I love animals, and when I see these commercials of dogs walking on one paw with casts on, I just really cry sometimes. Because it’s like I don’t won’t dogs to be abused like that, so that’s why I want to give the animal shelters some money,” De’Jonae said.

At just 9-years-old, De’Jonae started her own business, Dee’s Babycakes, this year and so far she has made more than 100 cakes and cupcakes.

Cooking since she was seven, De’Jonae’s mother, Rebecca, said her daughter watches all the episodes of Cupcake Wars and Kids Baking Championships, even recording them when she is not available to catch the shows when they air.

De’Jonae said she has even tried making a recipe that was demonstrated on one of the shows.

“It was kind of like an apple pie thing,” she said, but added she has not tried marketing them through her business.

For now, she is concentrating on cupcakes and pound cakes.

“I started out making pound cakes because me and my dad love pound cake,” De’Jonae said.

And from there expanded into cupcakes, even creating her own specialty icings.

“I can’t give you the recipes, she said, but flavors include Lemon 7 Up Icing, Strawberry Shortcake Icing and Vanilla Butter Cream Icing.

In addition to selling her cakes and cupcakes through her Facebook page during the Easter weekend, Rebecca said, her daughter partnered with the Vicksburg Mall and the manager to set up shop outside of her business, Real Deal Taxes, LLC.

Some folks even gave a donation to have their picture made with the Easter Bunny, she said.

“I was very proud of them both,” Rebecca said.

While De’Jonae did get some help from her 13-year-old brother when selling her baked goods, there are times, she said, when she likes to cook as a way to escape from him as well as her 16-year-old brother.

“I can’t deal with them all the time and it helps me get in my zone,” she said.

De’Jonae said she also liked cooking because it allows her to try new things.

“Plus kids love sweets,” she said.

Personal favorites of De’Jonae’s are Lemon 7 Up pound cake and Lemon Butter cupcakes, she said.

As a third grade home schooled student, Rebecca said, she takes advantage of De’Jonae’s love of cooking and incorporates it into her studies.

Not only is learning about measurement a way to teach math, while doing a cooking demonstration for this reporter, after cracking the eggs, De’Jonae explained how you need to wash your hands in order not to get sick from salmonella.

For those interested in ordering cakes or cupcakes from De’Jonae and having some of the proceeds go towards the animal shelters, be sure and visit Dee’s Babycakes on Facebook.

Full discloser: This reporter, along with others in The Vicksburg Post newsroom scarfed down one of the pound cakes and can testify they are good.