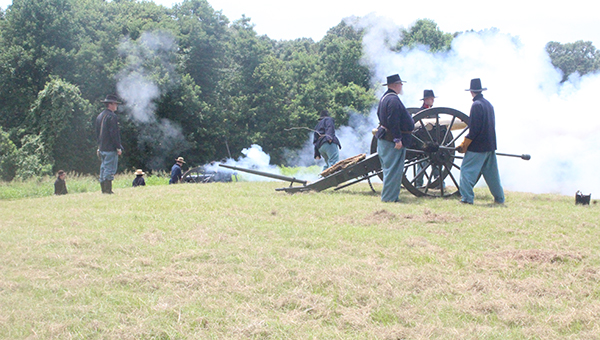 A gun crew from the Vicksburg National Military Park fires a cannon during a demonstration in 2018 for July 4. The park will hold artillery training for volunteers Saturday and Sunday. (File photo)

Area residents have the opportunity Saturday and Sunday to help tell the story of the Siege of Vicksburg.

The Vicksburg National Military Park is looking for volunteers interested in becoming involved in the park’s Living History Program. The park will be conducting artillery training for new artillery volunteers Saturday and Sunday from 8:30 a.m. to 3 p.m. to prepare them for the park’s summer cannon program.

In case of rain, the training will be held at the park’s maintenance area.

“We’re recruiting more folks to help out with the summer program,” Ranger Lela White said, adding the firing demonstrations are held each weekend during the summer and July 4. “We start the weekend before Memorial Day,” White said. “We don’t fire on Memorial Day.”

White is the park’s black powder expert. To qualify, she spent two weeks of historic weapons training at an Army National Guard base in Alabama.

She said the park’s training program includes teaching safety procedures, providing information on the park, and drilling on the cannon. During the safety training, she said, the volunteers “are taught about the explosive nature of black powder and the hazards they need to be aware with the cannons.

She said a cannon crew usually includes seven people, but can include up to eight or nine.

People ages 16 and older interested in participating in the training can call White at 601-636-0583, or by email at lela_white@nps.gov.

“Sixteen can only do a couple of positions, but 18 can do everything,” she said.