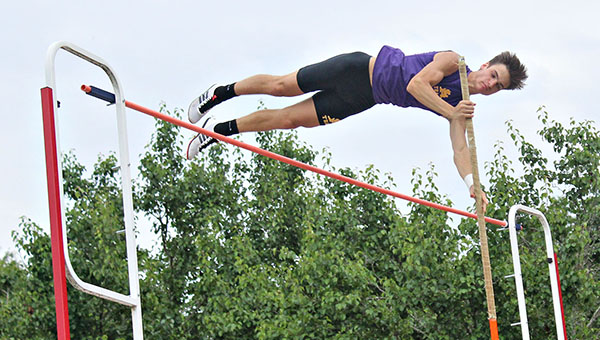 St. Aloysius’ Brayden Roesch clears the bar during the boys pole vault competition at the MAIS Class AAA state track and field meet Friday in Jackson. Roesch won the state title in the event for the second year in a row. (Ernest Bowker/The Vicksburg Post)

JACKSON — To be the best, all Brayden Roesch had to do was be his best.

The St. Aloysius junior won the MAIS Class AAA boys pole vault championship for the second year in a row on Friday by jumping a personal-record 13 feet at the state meet at Jackson Academy.

“It’s really cool. Especially since I didn’t PR for a year and a half until last weekend at Silliman. Having two PRs that close together is just crazy,” Roesch said. “It was competition, adrenaline and a close meet. I just feed off it.”

Roesch had to set the PR to win because Lee Academy’s Bryan Ray was matching him jump for jump. Ray had not gone higher than 12 feet this season, but went all the way up to 12 feet, 6 inches before missing on all three attempts at 13 feet to give the title to Roesch.

“I was looking at stats the other day and I think the highest (Ray) had jumped was 11 ½ and he came out today and jumped 12 ½. A lot of people had really good days today,” Roesch said. “It was crazy. I knew he had one more attempt so it was kind of in the back of my head. I didn’t want to freak out too much, but I was pretty confident I had it in the bag after I cleared that.”

After Ray missed on his last attempt at 13 feet, Roesch put in a little extra work. He had the bar raised to 13 feet, 7 inches to try and break Austin Golding’s school record of 13-6 set in 2004. He missed on all three attempts and will save the record for another day.

“A little bit,” Roesch said when asked if he was disappointed not to set the record. “But I’ve got another year to get it. I’m pretty confident I’ll get it pretty early next year.”

Roesch’s gold was not the only medal St. Al took home on the first day of the state meet. Preston McGowan won the long jump with a leap of 22 feet, 9 ½ inches, Markeece Wilson finished second in the discus, and Alvin Brown was third in the high jump.

Those finishes gave St. Al 38 1/2 points heading into Saturday’s running events at Jackson Prep, and enough of a foothold to challenge for the team championship. Saturday’s action starts at 9:30 a.m.

Lee Academy is in first place in the team standings with 40 points. Adams County Christian is third with 34 1/2, and Silliman is fourth with 28.

“We’re doing what we’re supposed to do,” St. Al coach Michael Fields said. “The only thing we’ve got to do now is beat them heads up. We’re supposed to be eight points down and we’re 1 1/2 points down, so I’m happy with where we are.”

In the Class AAA girls meet, St. Al sophomore Natalie Burke won the third medal of her high school track career by finishing third in the long jump.
Burke was the defending state champion in the event and jumped a personal-best 17 feet, 2 ¼ inches, but was no match for Hillcrest Christian’s Aaliyah Dixon. Dixon blew away the field by jumping 18 feet.

Burke and Lee Academy’s Emily Moser actually tied for second place, but Moser won the silver medal on a tiebreaker.

“I got a PR, 17-2, so I feel really happy with it because I did better than my best. The girl that won was 18 feet and that’s amazing. You have to respect her and be happy for her,” said Burke, who also finished fifth in the triple jump. “It was a good day for jumping. The weather was great, I warmed up really good and I hit the board really well which is something I struggle with.”

The only other female athletes competing in Friday’s field events for St. Al were Cati Matthews and Madelyn Roesch. Matthews finished third in the high jump, earning a bronze medal with a jump of 4 feet, 8 inches. Roesch finished sixth in the pole vault.

Other Vicksburg-area athletes to medal included Tallulah Academy’s Faith Kivett (second in the girls Class A long jump) and Joshua Collins (third in the Class A boys pole vault).