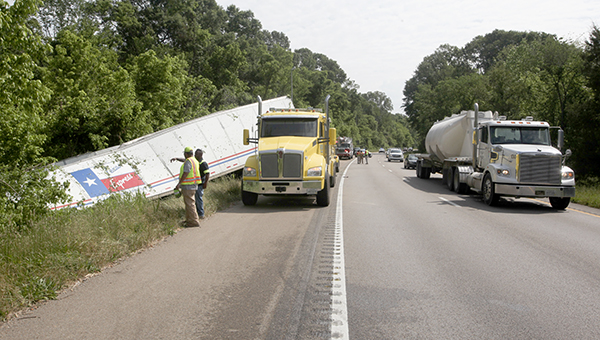 One lane of traffic is seen blocked due to an 18-wheeler that drove off of I-20 westbound Friday morning. (Courtland Wells | The Vicksburg Post)

A Jackson man received minor injuries when the 18-wheeler he was driving left Interstate 20 near the Clay Street exit early Friday morning.

Deputy Vicksburg Police Chief Bobby Stewart said L.B. Gordon, 70, of Jackson, the driver of truck, was taken to Merit Health River Region for treatment. He said Gordon was on his way to Monroe, La., at the time of the wreck. The truck, which is owned by Epes Trucking of North Carolina, was empty.

Stewart said police received a call about 5:42 a.m. Friday that a westbound 18-wheeler had left I-20 before the Clay Street exit at the 5-mile marker and gone down a ravine.

Fire Chief Craig Danczyk said the fire department’s report on the wreck indicated that Gordon was of the truck when firefighters arrived.

The report also said wreck caused some diesel fuel to leak on the ground, but it was contained.

The wreck caused westbound traffic on I-20 to be backed up for several hours before authorities were able to get the truck out of the ravine.

The wreck remains under investigation.