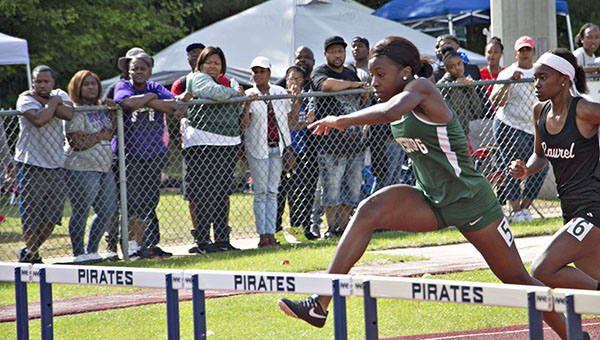 Vicksburg’s Char’Davia Anderson runs a hurdles race at the 2018 Class 5A state track meet. Anderson will compete in the 100 and 300 meter hurdles in this year’s state meet Friday at Pearl High School, and is a favorite to win both events. (File/The Vicksburg Post)

Moments after running one of the best races of her life, Char’Davia Anderson had to run one of the toughest.

The Vicksburg High senior wasn’t feeling well after blowing away the field in the 100 meter hurdles at last week’s Class 5A North State track meet, but still had to find a way to finish in the top four in the 300 hurdles to qualify for the state meet.

Anderson was fourth approaching the halfway point of the race, but rallied to finish second. Now she’ll go into Friday’s state meet at Pearl High School as the favorite in both events as she closes out her high school career.

“It’s been an exciting adventure. She’s a good kid, she works hard, she listens, and I like her will to win. She has a drive most kids don’t have. You don’t have to tell her to work. She’ll work,” Vicksburg coach Dee Robinson-Cable said. “To be able persevere from being last at the fourth hurdle, when she’s used to being second or third after the second hurdle, it’s really amazing just to see that even though she’s sick, this obstacle is not going to keep her from going to that state meet.”

Anderson has been to the state meet twice before, but hasn’t had a lot of success. She finished sixth in the 100 meter hurdles in 2018 and fourth in 2017.

This year has been different. She’s won most of her races in the 100, and clocked a blazing fast time of 14.6 seconds last week that put her as the top seed for the state meet. Ashlyn Jones of Laurel (14.83 seconds) and Brikayla Gray of West Jones (14.91) are the only other state finalists with seed times under 15 seconds.

“All the pressure’s on me. Every track meet, they look for Vicksburg. Is she here? What’s her time? It’s really a lot of pressure, because I feel like they’re looking for me now and I’ve got to show out,” Anderson said.

Robinson-Cable had more than confidence in her runner. She had a prediction.

“Last week, 14.6, that’s moving. She still won by at least two hurdles. So no one else was even close. She’s going to win,” Robinson-Cable said.

Anderson will be part of a small Vicksburg High contingent at the state meet. She was the only member of the girls’ team to qualify for an individual event. The 4×100, 4×200 and 4×400 relay teams also qualified.

The 4×200 relay is Barnes, Gray, Scott and Chastity McGowan.

Vicksburg’s boys team, meanwhile, has only one person qualified. Cedric Phillips will compete in the 200 meters. It’s an unusual position for a program that produced at least one state champion every year from 2011-17.

“This is the first year that it’s ever been just one kid that’s made it,” VHS boys coach Shaun Archer said. “We normally have a couple of relays, a couple of open events. For the past six years or so I’ve had a state champion in either the 110 or 300 hurdles. This year I didn’t even have a hurdler. So it’s been kind of an off year.”

Phillips will do his best to bring back a medal for the Gators. He has the fifth-best seed time in the 200, at 22.94 seconds, and the entire field seems to be chasing Callaway’s Justin Day and his seed time of 22.22 seconds. Archer felt that Phillips could reach the podium, though.

“He went into North State as a second seed and finished fourth. So he has just as good a chance as any of the other kids,” Archer said. “He’s been working hard in practice, so I’m looking for him to be on that podium Friday.”

Friday marks the start of the state’s biggest track and field weekend of the year. The MHSAA Class 1A, 3A and 5A state meets are Friday at Pearl High School. The field and distance running events begin at 11 a.m., and the other running events at 2:50 p.m. The 100 meter hurdles are first in the lineup, so Anderson will be among the first to compete.

On Saturday, the MHSAA Class 2A, 4A and 6A state meets will be at Pearl on the same time schedule.

On Saturday, the MAIS meet shifts to Jackson Prep for the rest of the running events. The 300 meter hurdles start things off at 9:30 a.m. and the meet will continue throughout the day.