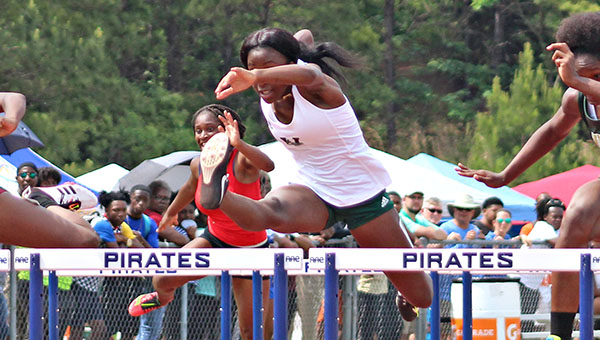 PEARL — Char’Davia Anderson was, quite literally, about a half-step slower than her best time in the 100 meter hurdles on Friday. Considering she needed to be about three steps faster to win a state title, she could live with it.

Anderson finished second in the 100 meter hurdles at the MHSAA Class 5A state track meet at Pearl High School. Her time of 14.80 seconds was comfortably ahead of third-place finisher Brikayla Gray of West Jones, but three-tenths of a second behind winner Ashlyn Jones of Laurel.

“It’s not my major PR, but I feel like I did very good. I knew I had to keep up with her, and she pushed me. And I love it,” Anderson said.

It was the third trip to the state meet for Anderson, but the first time she’s medaled. She finished sixth in the 100 meter hurdles last year and fourth in 2017. She was glad to finally get on the podium.

Later in Friday’s meet she was able to start a collection — she won the 300 meter hurdles.

Anderson led a small Vicksburg contingent into the state meet. She was the only female athlete qualified for an individual event and was part of the 4×100 and 4×400 meter relays.