Farmers’ Market kicks off despite weather 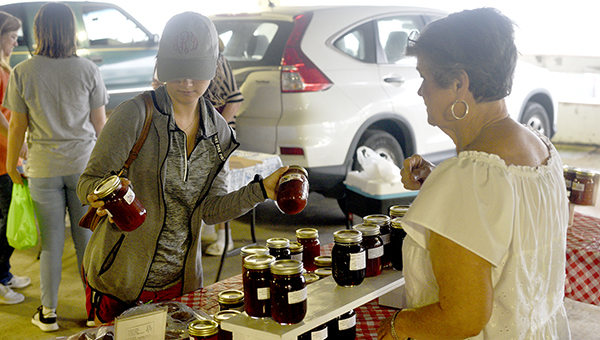 It wasn’t the sunshine they hoped for, and the city parking garage wasn’t the same atmosphere as the new park on Washington Street, but Vicksburg’s spring farmers’ market kicked off Saturday, attracting a small number of vendors and shoppers.

Heavy, continuous rain forced organizers to move the first market of the season to the city’s parking garage by Margaritaville, but neither the change of venue nor the inclement weather discouraged a few die-hards from coming out and checking the offerings.

“Rain doesn’t stop a farmer,” vendor Kate Montgomery said. “You work all year to prepare this stuff, so I wasn’t staying home.”

Montgomery, whose booth, Kate’s Jams and Jellies, has been a regular at the market since 2008, said business was good despite the weather.

“I’ve had some traffic,” she said. “I’ve seen a lot of young couples come by.”

Victoria Ross, a Vicksburg resident who attends Delta State, said she was at the market to buy strawberry jam for her grandmother.

“I’m here this weekend to visit family, and I was going to come to the market rain or shine,” she said.

Her aunt, Kate Ross, had several packages from her trip to the market.

“I’ve bought pasta and jelly and fudge,” she said.

“I was hoping to do better,” he said.

Roxanne Owens, also from Utica, who sells paintings and fudge, was making her first trip to the market.

Owens’ booth featured miniature paintings and two selections of fudge, plain and with walnuts. “The fudge has been a hot seller. That, and (paintings of) angels. I’ve sold out of my plain fudge, which is unusual. Usually I sell out of the walnut,” she said.

“I believe we had a good turnout despite the weather,” said Lowry Fowler, who, along with Rebecca Sigh oversaw activities at the market.

“We had vendors selling some different things, Sigh said. “It just really goes to show the talent we have locally and in Mississippi.

“It rained last year for our first farmers’ market and didn’t rain the rest of the markets,” she said. “Maybe this will be the only time it rains this year.”