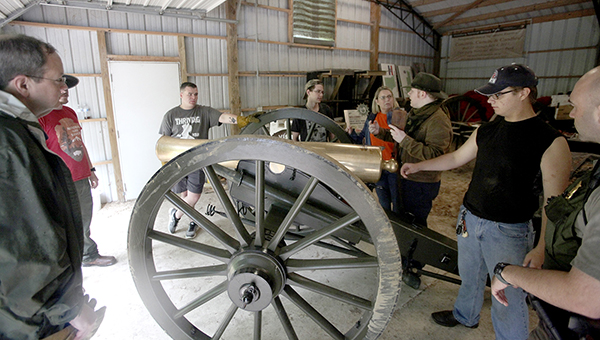 In the confined space of a warehouse in the maintenance area at the Vicksburg National Military Park, a group of people practiced taking their places around a 12-pound brass Napoleon smooth bore cannon.

It was drill time for the volunteers of the park’s living history program; a time for veterans to refresh their skills and for the new recruits to learn.

The volunteers began their training at 8:30 a.m., going over safety procedures — learning about the explosive nature of black powder and the hazards they need to be aware with the cannons before beginning the drills to learn the different positions and duties necessary for a crew to fire the gun.

During that time, they also learned about misfires and the procedures to deal with them.

The process to learn how to operate the cannon, Ranger Lela White said, is done through “command by detail,” where each position has a number, and each job is called out by the gun captain to prepare the gun for firing or to secure it after firing.

“This is like a dance,” White said, “Each member has a partner and they each have steps they take together to perform the dance.”

Once trained, the crews will present cannon firing demonstrations each weekend during the summer and July 4 beginning the weekend before Memorial Day.