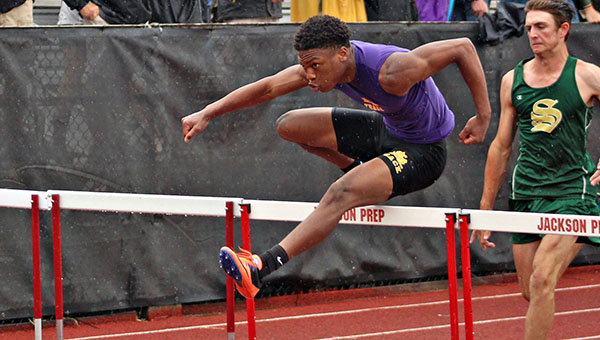 FLOWOOD — Three and a half seconds is an eternity in track and field, roughly equivalent to 25 or 30 meters during a sprint race.

On Saturday, that gap seemed even wider as the St. Aloysius Flashes saw their state championship hopes get further and further in the distance.

Silliman Institute’s 4×400 meter relay team beat St. Al’s squad by 3 ½ seconds in the final event of the day, and with it clinched the MAIS Class 3A team championship at the state meet at Jackson Prep.

Silliman finished with 122 points to repeat as state champion and outlast St. Al and Lee Academy in a tight three-way battle. St. Al totaled 112.5 points and Lee had 107. Adams County Christian was a distant fourth with 56.5.

The meet came down to the final event, the 4×400. Silliman had a 7 1/2-point lead on the Flashes and, with 10 points going to the winner through two for seventh places, only needed to finish to clinch the team title.

Silliman did more than that, clocking a time of 3 minutes, 32.51 seconds to blow away the field. St. Al’s squad of Trinye Brown, Brennon Williams, Preston McGowan Jr. and Alvin Brown finished second in 3:36.01.

“The kids fought hard to beat Lee. It was a three-team battle, and coming up with something is better than coming away with nothing,” St. Al coach Michael Fields said, adding that Silliman’s depth was what ultimately decided things. “(Silliman) had a few events with two people and we only had one event with two people. We lost some distance runners last week. In the long run, it came back to haunt us.”

It’s the second year in a row St. Al finished as the runner-up in the team standings to Silliman. St. Al has finished in the top three all four seasons since joining the Mississippi Association of Independent Schools, and won the 2017 title.

“We were short on numbers this year. We started the season with seven guys and ended up with 10. They put in hard, consistent work and I’m proud of them. Most people would have thrown in the towel,” Fields said.

Although they didn’t win the team title, it was still a wildly successful meet for the Flashes. They won four individual state championships and 12 medals. Williams and McGowan each won six medals.

“It feels great. It’s all the hard work we’ve been doing. It pays off,” Williams said.

St. Al’s second-place finishes were both remarkable and frustrating.
Williams broke the Class 3A record in the 300 meter hurdles with a time of 39.45 seconds — and lost to Lee’s Nickos Nolan, who finished in 39.42.

Those three results might have swung the team standings St. Al’s way had Williams and McGowan come out on top, but Fields said it was hard to get upset with record-breaking performances.

“Brennon had a great day. Any time you get 39.4 in the 300 hurdles as a sophomore is great. Preston PR’d in the 100 and got second in a great race. Both of them had a great day and we just came up a little short,” Fields said. “The good part is they PR’d, so they did everything right. The bad part is that point swing hurt us.”

For St. Al’s girls’ team, the running portion of the state meet was largely forgettable. The Lady Flashes only won one medal in five events Saturday, a bronze for their third-place finish in the 4×400 meter relay.

St. Al finished sixth in the team standings with 44.5 points. Bayou Academy won the team title with 121.5 points and Hillcrest Christian was second with 92.5.

The 4×400 was the final event of the day, and on the whole a good way to go out. The team of Natalie Burke, Frances Thames, Raven McDonald and Caty Matthews posted a time of 4:18.76. It was far behind Hillcrest’s winning mark of 4:05.40, but still a school record.

“Our girls’ mile relay got on the podium and ran their best time of the season and got a school record. I’m proud of them,” Fields said.

In the Class 1A meet, several Vicksburg-area athletes won medals.

Tallulah Academy’s Faith Kivett took second in the girls’ 200 meter dash, while Sharkey-Issaquena’s Emma Rutherford was second in the 100 meter hurdles and Julianna Scott was third in the 400 meters.

Among the boys, Briarfield Academy’s Undrea Spencer won the 800 meter run with a time of 2:14.80 and T.J. Baker finished second in the 200 meters.