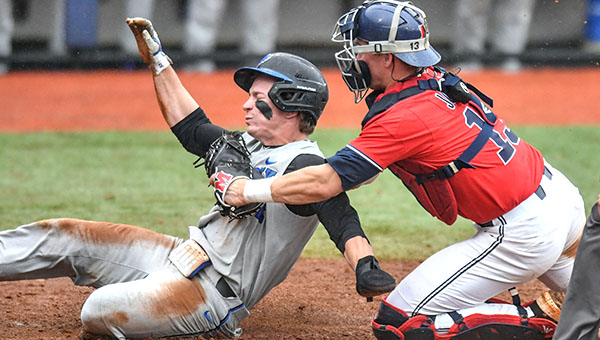 Ole Miss catcher Cooper Johnson (13) tags out Kentucky's Austin Schultz earlier this season. Johnson on Tuesday was named the Southeastern Conference Player of the Week after leading the Rebels to a series win over Texas A&M. (Bruce Newman/The Oxford Eagle)

BIRMINGHAM, Ala. — Cooper Johnson got a well-deserved reward for helping Ole Miss break a decades-long drought on the Bayou.

The junior catcher hit .545 with six runs scored and five RBIs last weekend as the Rebels took two of three games from LSU, and on Monday was named the Southeastern Conference baseball Player of the Week.

It was Ole Miss’ first series win in Baton Rouge since 1982. The 37-year streak included 19 series. It was also LSU’s first series loss at home this season.

Johnson went 2-for-4 in the series opener, and hit a solo home run. He was held hitless in game two, but walked and scored a run while catching a brilliant game for Ole Miss freshman left-hander Doug Nikhazy. Nikhazy allowed one run in 6 1/3 innings in the Rebels’ 5-1 victory.

On Sunday, the Rebels took the series with a 19-15 victory in a 4 hour, 21 minute marathon. Johnson went 4-for-5 with four runs scored and four RBIs.

After a dramatic LSU comeback — the Tigers scored six runs in the bottom of the ninth to tie the score at 15 — Johnson led off the 10th inning with a walk and came around to score the go-ahead run. Johnson set career highs for hits and runs in Sunday’s game.

Mississippi State also had a successful weekend on the road. It took two out of three at Texas A&M (32-17, 12-11), and Ethan Small was named the SEC Pitcher of the Week on Monday for his efforts in a 4-0 win in the opener.

Small retired the first 19 batters he faced and did not allow a hit in seven innings in a 4-0 victory. He finished with eight strikeouts. Mississippi State lost the second game 1-0, but took the finale 4-3.

Of his 12 starts on the season, Small now has 11 with two or fewer runs allowed and hasn’t allowed more than three runs in any start. His eight strikeouts moved his season total to 122, matching his mark from 2018, which ranks seventh on the MSU single-season charts.