Vikings in middle of pack in 6A golf; St. Al finishes third in MAIS state tournament 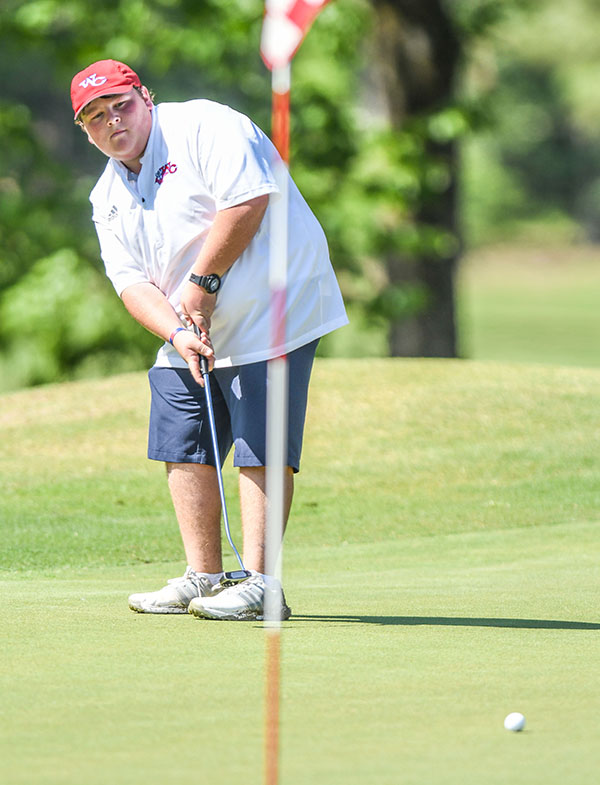 Warren Central's Taylor Lampkin putts on the seventh hole in the MHSAA Class 6A State Tournament at the Ole Miss Golf Course in Oxford on Monday. (Bruce Newman/The Oxford Eagle)

OXFORD — The MHSAA Class 6A Golf Championship turned into a three-team race Monday, and Warren Central was not one of the three.

All four of Oxford’s golfers shot in the 70s to dominate the leaderboard, and the Chargers were tied for the team lead with Madison Central after one round on the Ole Miss Golf Course.

Oxford and Madison Central both shot 307 as a team and Tupelo was third at 309. Northwest Rankin was fourth, at 332, and Oak Grove fifth at 346.

After that, the team standings were a competitive mess that Warren Central was right in the middle of. Five teams were within five shots of each other heading into the final round on Tuesday.

The Vikings totaled 357 as a team to put them in a tie for eighth place with Pascagoula, but they were only one shot behind St. Martin and DeSoto Central. Clinton was not far behind, at 361.

Warren Central’s top golfer was Hartley Sullivan, who shot an 85. Taylor Lampkin was next with an 87, Reed Buys shot 89 and Josh Hallberg a 100.
Zack Montpelier and Northwest Rankin’s Carter Berry were both disqualified for signing incorrect scorecards.

Warren Central coach Matt Williams said the Vikings did not have their best day on Monday, but was happy that they still had a chance to finish in the top five of the team standings.

“The boys know where we stack up, and we’ve played the majority of the teams we are competing against,” Williams said. “We want to finish the year on a great note. That is the goal, to get in the top five. The course is tough and will be tougher tomorrow. We just need to grind out this last round and see if we can make up some shots.”

Gulfport’s Sam Lee shot a 72 to sit atop the individual leaderboard, but had plenty of rivals nipping at his heels.

Madison Central’s David Beard shot 74 and was one of 14 golfers to break 80 in the first round. Beard’s teammates Matt Wilkinson and Cade Wilkinson both shot 76.

Oxford had four golfers in the 70s. Frank Yerger and Matthew Downing both shot 75, Mark McManus was at 78 and Taylor Durham at 79.

Larson finished sixth in the individual standings. Silliman’s Brett Baker and Cathedral’s Chase Kaiser both shot 71 to tie for the state title.

Baker’s teammate Hastings Davidson shot 76 to finish fourth and power Silliman to the team championship. The Wildcats had a team score of 329 to beat Bayou Academy by eight shots.

St. Al was in third place and Central Hinds was fourth at 352. Central Hinds’ Ryan Talley shot a 77 to finish fifth in the individual standings.