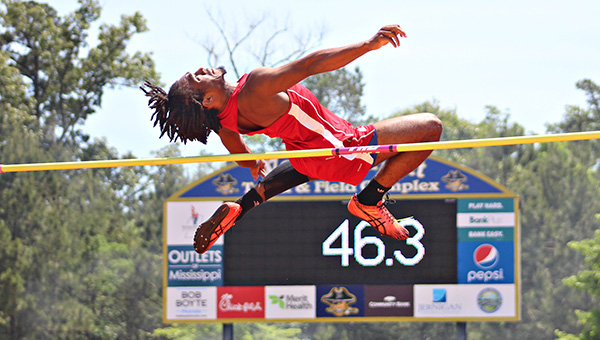 PEARL — When he missed his first two high jump attempts, no small bit of frustration, doubt and flashbacks rushed through the mind of Jalen Glass.

The Warren Central senior was the state championship favorite in the event last year and had a similar failure. He missed at 5 feet, 8 inches — the same height he was struggling with on Monday — and never even made it to the state meet.

This time Glass mounted a comeback. He cleared the first barrier on his final attempt and then soared over the bar on his next four tries. When the competition was over he was flying and standing tall as the MHSAA Class 6A boys high jump champion.

“It feels great. It’s my second year with track and I’m trying to get better. I got stuck at 6-6 three meets in a row so I was just trying to get better. It’s hard for us to practice without having a track. It’s my second year doing this, so I’m happy,” said Glass, whose winning height was 6 feet, 4 inches. “Last year I PR’d at 6-7 and this year I was getting stuck at 6-6. The goal was to win, so I got it done.”

Glass won a heated competition for the state title. Five jumpers were still alive when the bar was raised to 6-4. Glass cleared that height on his first try — a feat that ultimately gave him the title on a tiebreaker — and then waited.

Clinton’s Michael Bell, George County’s Don’Trez Galloway and Ocean Springs’ Kace Reed all missed on their three tries at 6-4. George County’s Ron Miller missed twice and brushed the bar on his third try, and despite wobbling precariously on the mounts it stayed put to force a head-to-head battle for the title.

“I wasn’t nervous at all,” Glass said of his reaction to Miller’s jump. “I expected it because he was jumping pretty good. I was having fun competing.”
At 6-6, Miller knocked down the bar on all three attempts. Glass did it on his first two, and when he made his third pass — also a miss — it didn’t matter. Thanks to his efforts at 6-4 he owned the tiebreaker, which is fewest misses at the last cleared height.

Even so, Glass wasn’t sure if he’d won.

“I didn’t (know) because I don’t know how it goes by scratches. All I knew was I competed well. I was doing some first place talking,” Glass said with a laugh.

The state title was both a rags to riches story and a comeback all in one shot. Glass did not compete in track and field until his junior year. Then he entered the 2018 North State meet as the man to beat, having cleared 6-7 two weeks earlier, but couldn’t even make the minimal entry height of 5-8.

“Last year I got frustrated. It happens. You have a meet where you jump so well, and then you get stuck on one height. You’re thinking about it too much,” Glass said.

In other events, Warren Central’s Jai Kingdom finished fifth in the 110 meter hurdles and Joshua Griffin was fourth in the 300 hurdles.