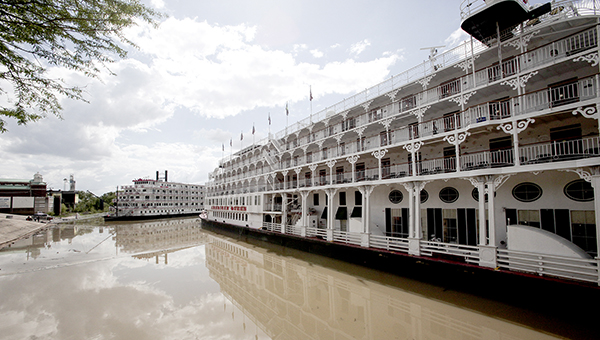 American Cruise Lines is looking to develop an agreement with the city for docking space at the Vicksburg riverfront, Mayor George Flaggs Jr. said.

The announcement came Monday, almost one month after the Board of Mayor and Aldermen authorized the mayor in April to sign a letter of intent with Viking USA LLC to lease a section of the city’s riverfront to the cruise line to dock its cruise boats.

“We had a discussion with one of the cruise lines last week, and came to the understanding,” he said.

Flaggs said at Monday’s meeting he and city attorney Nancy Thomas talked with representatives for American Cruise Lines about the company developing its own docking area on the riverfront.

“I think it’s going to make (the riverfront) bigger and better. We’re going to give them adjacent property and give them the same agreement (as Viking), but they may want to put more money into it than Viking has committed,” Flaggs said. “They are going to present a full-fledged proposal.

“I’m not sure when it will be presented. We gave them all the descriptions of the property we own. We had a very good meeting. They’re going to show us how they want to do it and a design,” Flaggs said. “ It is my understanding it may be in the million dollar range; it’s a very aggressive proposal.”

American Cruise Lines spokeswoman Alexa Paolella said company officials plan to make a proposal to the city “in the coming months that will allow us to visit more often and stay longer each time we do.

“With the addition of our fourth brand new riverboat on the Mississippi next year, we look forward to calling on Vicksburg more than any cruise line in recent history. We have always worked closely with Vicksburg and look forward to growing tourism together in the city.”

According to information from American Cruise Lines, the company’s boats are expected to make an estimated 70 stops in Vicksburg, and an estimated 100 in 2020.

“We’re open to the economic development of the riverfront, and that means everybody,” Flaggs said. “We’re working with them; we’re working with everybody. I’m not anti-business, (but) it’s not my job to make your business more competitive than somebody else’s business. My job is to make sure opportunities are fair. We do everything to make sure they are fair.

“I’m excited about it, because now we’ve got interest in the riverfront that we never had before. That’s less money we have to spend (to improve the riverfront).”

Under the proposed agreement with Viking, the city will lease the company a portion of property north of the waterfront for 20 years with a five-year extension.

Viking will build a docking facility for its boats and pay the city $1 per passenger.

Developing piers for riverboats is part of an estimated $11 million riverfront development project that also includes benches, an amphitheater, park, pedestrian crossings at the Kansas City Southern Railroad tracks, and an elevated walkway from Washington Street to the water.