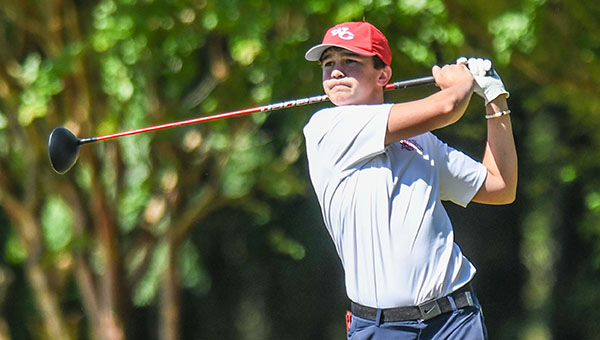 Warren Central's Josh Hallberg tees off on the eighth hole during the first round of the MHSAA Class 6A Golf Championship Monday in Oxford. Hallberg shot a 78 in Tuesday’s second round, 22 shots better than his first round, to help the Vikings to a fifth-place team finish. (Bruce Newman/The Oxford Eagle)

OXFORD — Warren Central was way too far behind to come all the way back at the MHSAA Class 6A Golf Championship, so it settled for a phenomenal turnaround.

The Vikings improved their team score by 40 strokes from round one to round two, and rocketed up the standings to a fifth-place team finish Tuesday in the state tournament at the Ole Miss Golf Course.

“We played like we were supposed to,” Warren Central coach Matt Williams said. “We had no pressure. They stayed even keel throughout the round and grinded it out. I’m very proud of them.”

Warren Central finished with a two-day team score of 682. It was in ninth place after the first round.

Tupelo won the state championship with a score of 602. Madison Central was second, with 611, Oxford was third with 612, and Northwest Rankin was fourth with 658. Warren Central was next, and DeSoto Central was sixth at 699.

Gulfport’s Sam Lee was the individual medalist. He shot 72 in both rounds to take a one-shot victory over Tupelo’s Walker Wise.

Eleven players entered the final round within seven shots of the lead, and six finished within six shots of Lee. Wise shot a 69 on Tuesday and Oxford’s Mark McManus had the low round of the day with a 68. McManus finished at 146 for the tournament, two shots back and tied with Madison Central’s David Beard for third place.

For Warren Central, Hartley Sullivan and Reed Buys both shot 80, Taylor Lampkin and Zack Montpelier each shot 83, and Josh Hallberg had the low round of the day with a 78.

Eleven of the 13 teams in the tournament improved their scores from the first round to the second, but none had as big a swing as Warren Central. A lot of that had to do with Hallberg.

Hallberg normally shoots in the 80s, but got off to a bad start Monday and finished at an even 100 for his worst round of the season. He regrouped on Tuesday and trimmed 22 shots off that score to account for more than half of the Vikings’ improvement as a team.

“Josh played extremely well. He hit great tee balls, and when he got in trouble he took his medicine and made some shots to save par,” Williams said. “He put a lot of pressure on himself (Monday). He wanted to shoot a certain number, and when he reached that number early in the round he let it get to him. Today he had a better mindset.”

So did the Vikings, when it was all said and done. They had a top-five team finish as a goal for the state tournament and not only accomplished it, but got to erase a potentially sour-tasting end to the season.

“This was the best round we had all year. Yesterday was the worst,” Williams said. “I’m very proud of what they did. I knew we had a good round in us.”