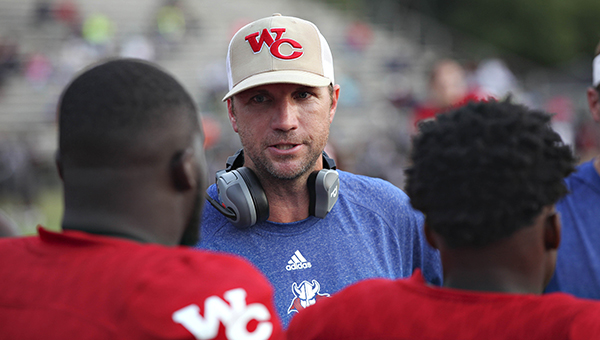 Warren Central football coach Josh Morgan talks with players during a preseason jamboree game in 2018. Morgan and the Vikings will go on the road to play Northwest Rankin in their spring game Wednesday at 6 p.m. (File/The Vicksburg Post)

Bulldozers and backhoes have been busy this week at Warren Central’s Viking Stadium, smoothing out gravel to form a base for the artificial turf surface that will be laid down in the coming weeks.

It’s not the only construction project going on out there.

A hundred yards away on the practice field, Warren Central’s football team has also been rebuilding itself. Nineteen new starters will be on the field when that new turf is christened at the Red Carpet Bowl three months from now. It’s nothing the Vikings haven’t dealt with before, but it does mean there’s been plenty of work to do during the past few weeks of spring practice and plenty more ahead this summer.

“One good thing is, there are a lot of jobs open. They’re competing day in and day out to earn spots,” Warren Central head coach Josh Morgan said. “The competition level has been great. Sometimes you don’t get that with a veteran team where you have your guys penciled in and know who the starters are going to be.”

This time, the Vikings are trying to bounce back from a 5-6 record  — their first sub-.500 season since 2011 — while dealing with roster turnover and breaking in a new quarterback. Sophomore Eli Anderson, who threw five passes last season, is expected to be the starter on opening day.

“We had this (in 2015) and we were able to withstand it. We’re leaning on the program and the way we develop players, and continuing to push on,” Morgan said. “We have some talented players that just need more opportunities and experience. That’s why things like the spring game and spring practice, and summer workouts are so important. It helps to make them a more seasoned player.”

Warren Central will conclude its spring practice period on Wednesday at 6 p.m. with its spring game at Northwest Rankin. The game was originally scheduled for Friday, but moved up two days because of heavy rain and thunderstorms that are in the forecast later this week.

The teams will play a regulation, four-quarter game. Between each quarter the junior varsity squads will take the field for 10-play series on offense and defense, which will be conducted simultaneously on either end of the field.

This year’s spring game is a mix of old and new for Warren Central. It had played Brandon the past four years using the same concept of a regular game rather than a limited jamboree or scrimmage.

Brandon, however, is on the regular-season schedule for next season and neither team wanted to play each other in the spring game and show too much to the other. That led to the matchup with Northwest Rankin, a longtime Region 2-6A rival that was moved to a different region and off the 2019 schedule in the most recent MHSAA realignment.

Warren Central and Northwest Rankin have built a good, competitive rivalry over the years and Morgan said this was a way to both keep it going and give each other a good test heading into the summer.

“Northwest Rankin got out of our district, they’re competitive, and we’re going to get a good read on our ballclub,” Morgan said, adding that keeping the format of a regular game also helped to that end. “It puts you in situations. That’s a good thing. It lets you see what you’ve been working and training on, and that’s what we need the most of.”