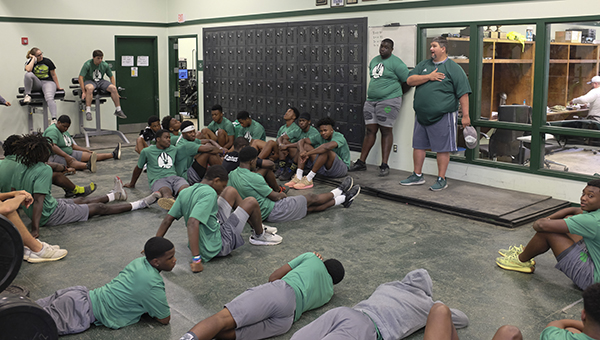 Vicksburg High’s 2018 football season opener was canceled because of heavy rain and thunderstorms. Its bridge game to the 2019 season suffered the same fate.

The Gators were scheduled to play in a 10-team jamboree Thursday at Alcorn State University, but heavy rain and storms that are in the forecast forced its cancellation. They instead wound down spring practice on Wednesday with a weightlifting session and workout.

Missing out on the spring game was a lost chance to see how far the team has come in the past few weeks, head coach Tim Hughes said.

“We had a lot of questions going into it. Not a closet full like last year. It would have been nice to get those snaps in and see those, but we’re doing the best we can to go to a team camp in Florida this summer and if we do that we’ll get plenty of snaps,” Hughes said. “When you practice against yourself, you know who’s going to get that ball and you know who’s going to adjust. It’s your chance, as a team, to get to perform. Certain positions, like quarterback, you’re always going to make sure things are safe to preserve an individual while you’re doing it at your practice but it’s a live go at a spring game.”

The Gators will have 18 starters returning when they open the season against Madison Central in the Red Carpet Bowl on Aug. 23, including four each on the offensive and defensive lines.

Depth, however, will be a factor all season long. There are only 56 players currently on the roster, some of whom are not practicing because of injuries. Hughes hopes to have about 50 available for the season, which will still require a lot of the starters to play both offense and defense. He said that’s a role they’ve become accustomed to.

“They’ve done a good job of, even last season and into this spring, of owning that role. If they’ve got to go both ways then they’re going to go both ways and they’re going to do it to the best of their ability,” Hughes said. “The experience is where it’s night and day. There’s very few positions where it’s somebody who hasn’t had a whole season already of experience.”

One thing Hughes and his coaching staff have emphasized this spring is defense. The Gators allowed 42.8 points per game last season. They allowed 50 points or more three times, and every opponent scored at least 21.

Hughes is hoping to solve that by focusing on tackling in the offseason.

“We saw a lot of defensive woes last season and a lot of that we attribute to a lack of tackling. It’s just one skill set that jumped out to me. When we were bad tackling last year, it wasn’t just on Friday night. We were bad tackling every day at practice,” Hughes said. “But we specifically worked on it this offseason. That’s one thing where I would have loved to have seen a spring game where we get to go tackle other people. But in practice this spring we’ve looked a heck of a lot better.”