Petty’s charity ride to stop in Tallulah, roll through Vicksburg on Thursday 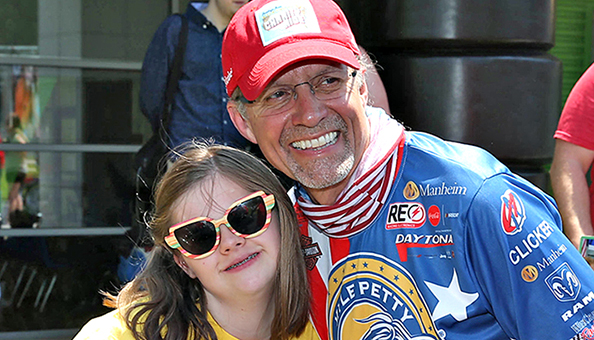 Twenty-five years ago, NASCAR legend Kyle Petty and a few of his friends hopped on their motorcycles and rode from North Carolina to Arizona for the next race on the Winston Cup schedule.

It was a way for them to unwind at the tail end of a grueling nine-month schedule, but it didn’t take long for it to morph into something more.

A quarter century later that idea has become reality — and it’s coming through Vicksburg this week.

The 2019 Kyle Petty Charity Ride Across America started last week in Seattle and will end Saturday in Key Largo, Florida. On Thursday morning more than 150 riders will roar through Vicksburg, after making a fuel stop at Love’s Travel Stop in Tallulah at 9:15 a.m.

“Every year we ride, we go through some beautiful areas. But the one thing a motorcycle does, that this ride does, is we not only see great things and great areas, we meet great people. The people are what make it. So the more people that come out and say hello and want to talk, it’s a lot of fun,” Petty said. “Everybody gets off and mingles. The riders and celebrities will come to you. You don’t have to chase them down. Every stop they’ll sign autographs. We have cards that we give out, there’s hats and T-shirts for sale and things like that, but they’ll get to meet everybody they want to meet that’s there.”

The ride benefited several other charities during its first decade, and for the last 15 years has served as a fundraiser for Petty’s Victory Junction camp in Randleman, North Carolina.

Victory Junction provides camping experiences for children with chronic or life-threatening illnesses. It was founded in 2004, a few years after the death of Kyle Petty’s son Adam in a racing accident at New Hampshire International Speedway.

“When (Adam Petty) was killed, he had been to a camp like this and we had both been to a camp like this on a motorcycle ride to help them raise funds. I had been fortunate around the same time to run some sportscar racing with Paul Newman. When Adam was killed, I talked to Paul a little bit and he asked if I’d ever thought of building a camp. And Adam had always wanted to build a camp. So we started working on it instantly in 2001 and opened the doors in 2004, and since that time we’ve never looked back,” Kyle Petty said. “We’ve seen 30-some-thousand kids, it’s totally free of charge for the kids that come to camp and their parents. It’s a really cool place. Instead of going to see kids in the hospital, we bring them to us. It’s a personal ride for me, always.”

The Charity Ride is also a huge logistical undertaking. Moving 200 riders, motorcycles and support vehicles from one corner of the country to the other requires months of planning, plus coordination and cooperation from local authorities. Interstate 20 and the Mississippi River bridge will be closed for a few minutes Thursday as they pass through Vicksburg.

Petty said a two-person staff consisting of his wife Morgan and communications specialist Ginny Talley handles most of the arrangements.

“It takes us 11 months to get us to this point. Everywhere we go, we have to get 225 hotel rooms. You have to feed 225 people breakfast, lunch and dinner. You have to fuel 150 motorcycles and about 12 support vehicles three or four times a day. And you’ve got to talk to local law enforcement — state patrol, local sheriffs, local municipalities — to get permission to come through their area and see if they can help you,” Kyle Petty said. “I told (Morgan Petty) one day the Army is going to call and they’re going to want you to move troops, because that’s about what it’s like.”

This year’s 3,700-mile, nine-day route is the longest in the Ride’s history. It’s also the first time it has come through this part of Mississippi. After 25 years, coming up with new routes and tweaks on the formula can be difficult, but Petty said he’s looking forward to keeping it going for years to come.

“I cannot believe we’re still doing this ride after 25 years. It is extremely special. We did that first year and thought, ‘Man, it will never get any better than this. We’re never going to do it again,’” Petty said. “Then the next year some guys said let’s do it another year. Then we made a pact that we were going to do it to five and then quit. We got to five and said we can make 10. That’s the way it’s been. I don’t think we’re ever stopping it.”

KYLE PETTY CHARITY RIDE
The 25th annual Kyle Petty Charity Ride Across America will stop for fuel and a meet and greet with fans at the Love’s Travel Stop in Tallulah Thursday at 9:15 a.m. Among the 200 motorcyclists on the ride are former NASCAR drivers Kyle and Richard Petty, Donnie Allison and David Ragan, and former NFL stars Herschel Walker and George Rogers.
The meet and greet is free and open to the public. The riders will pass through Vicksburg on I-20 late Thursday morning.
The ride benefits Victory Junction, a camp for children with chronic or life threatening illnesses. This year’s ride began May 3 in Seattle and ends Saturday in Key Largo, Florida, after covering 3,700 miles.