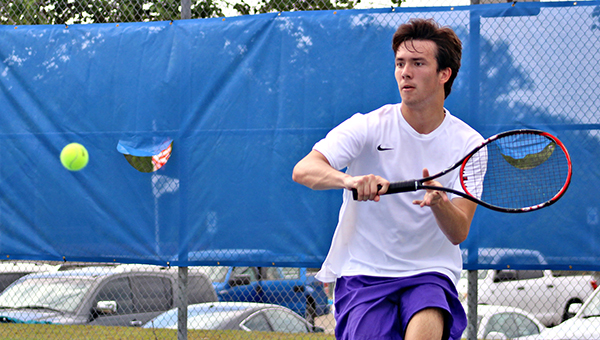 Early in the first set Wednesday, Braxton Chewning felt like it would be a pretty good day. It wound up being the best kind of day.

The St. Aloysius senior won twice in straight sets, including a 6-2, 6-3 victory over Laurel Christian’s Bert Brassi in the final, to win the No. 2 boys singles state championship at the MAIS Class AAA tennis tournament at Halls Ferry Park.

It’s the first state title for Chewning, who has played for St. Al for four years but missed the 2018 season with mono.

“It’s the best feeling, because this is my first state title and the last competition I’ll ever play in high school. So it’s great to go out like that,” Chewning said. “Considering I didn’t play at all last year, it was great to come back and have a year like this for my senior year.”

Chewning beat Heritage Academy’s Blake Ward 6-2, 6-1 in the semifinals and then got a dose of revenge against Bassi. The Laurel Christian player beat Chewning in straight sets at last week’s South State tournament, but this time it was Chewning who chewed up the points and left victorious.

“I was on today,” Chewning said. “The guy I just played (Bassi), I lost pretty badly in the South State championship so he was coming in pretty confident and I was uncertain about it. But I was on today.”

Chewning’s teammate Elise Piazza did not have the same happy ending to her high school career.

Piazza trounced Lee Academy’s Alexis Oliver 6-1, 6-0 in the No. 1 girls singles semifinals and then easily won the first set against Starkville Academy’s Lily Holiday in the championship match. Then she hit a wall.

Holiday rallied to win the last two sets, losing only four games total, to take the state title with a 3-6, 6-1, 6-3 victory.

“I don’t even know, honestly,” a dejected Piazza said when asked where the momentum shifted. “I guess she just started playing better and I started getting tired. I came out with a lot of power and then I started losing it.”

St. Al had seven entries in the state tournament, but Chewning, Piazza and the No. 1 girls doubles team of Ashley Jarratt and Taylor Chewning were the only ones to reach the finals.

Jarratt and Taylor Chewning beat Canton Academy’s Betsy Pace and Kate Bowen 6-3, 6-3 in the semifinals. Rain moved in between the semifinals and finals, however, and the championship match was postponed.

Jarratt and Chewning will have to return to Halls Ferry Park Monday at 4 p.m. to play for the championship. The two sophomores won the No. 2 girls doubles title the past two seasons and are playing in the No. 1 position for the first time.

Jarratt and Chewning will play Park Place’s Reagan and Maggie Savell, a frequent rival and nemesis. This will be the fourth time this season that the two doubles teams have played each other.

The Savell sisters won in the regular season and again in the District 3-AAA tournament. Jarratt and Chewning won a three-set match last week at the South State tournament.

The Savells beat Heritage’s Haley Barker and Mary Virginia Fields 6-3, 6-4 in the state semifinals on Wednesday.

St. Al’s No. 1 boys doubles team of Miles Harris and Adam Eckstein were knocked out in the semifinals by Heritage’s Carter Smith and Drew Knittig 7-5, 6-4. The No. 2 doubles team of Parker Brown and Carson Collier lost to Starkville Academy’s Graham Stevens and Jack Wiggins in three sets, 6-3, 6-7, 6-3.

Heritage Academy won both the boys and girls team championships. Teams are awarded one point for each match victory, and the Patriots won eight matches and three state championships in all.

It was the second consecutive girls state championship for Heritage.