Ribbon cut on Sports Force Parks on the Mississippi 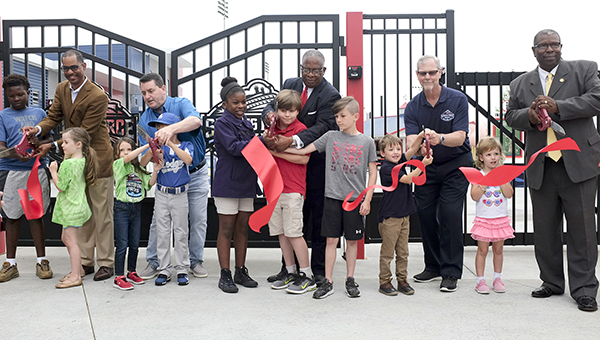 Officials with the city of Vicksburg, The Sports Force and area youth join together in cutting the ribbon at the Sports Force Parks on the Mississippi Thursday afternoon. (Courtland Wells | The Vicksburg Post)

Teams may have been competing for trophies and rankings since Presidents Day, but Sport Force Parks on the Mississippi had never truly opened until Thursday.

Before a crowd numbering well more than 100 people, public officials, representatives from the city of Vicksburg, The Sports Force and a handful of children cut a red ribbon to open the park to the public — officially.

Flaggs added city officials and residents needed to thank the people “who had the vision and the foresight to say to us to do this, and certainly to the voters. They said at the ballot box, ‘Yes, two cents on hotel and restaurant is worth every penny for the investment in our children.’

“Today, and this day going forward, is bigger than recreation, it’s bigger than sports … this is the beginning of growth and economic development in this city.”

He called the sports complex “second to none; we have received compliment after compliment. It is a fantastic facility.”

“We’re going to have something that’s going to be a game-changer,” Monsour said.

North Ward Alderman Michael Mayfield, who came on the board just after the property was bought, said, “I’m proud that it’s here. I’m proud that we put the time and effort in, and I have no doubt that it will turnout to be something good for Vicksburg and Warren County.”

The park opened for competition the weekend of Presidents Day in February. Since then, Sports Force president and CEO Brian Storm said the park has had 43,000 visitors, and 431 tournament teams from across the South have competed in more than 1,500 games.

“This park is your park,” he said.

Sports Force Parks on the Mississippi was built under a plan where The Sports Force leased the site for the sports complex on Fisher Ferry Road from the city to build the facility and then lease it back to the city, which pays rent to The Sports Force to let the company to recover its costs for designing and construction.

Money for the lease comes from revenue raised by the special 2 percent tax on hotel room rentals and food and beverage sales approved by voters in 2017.