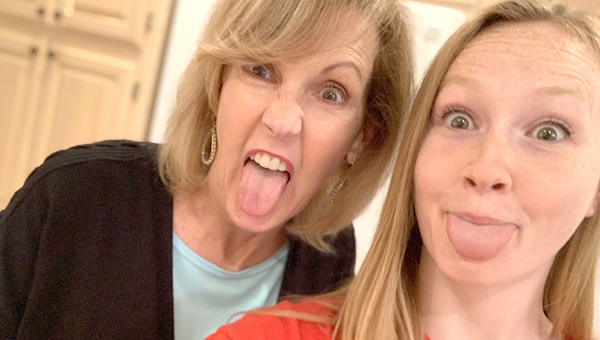 Post reporter Terri Cowart Frazier, and her daughter, Tess, have a little fun taking a selfie.

Back in the good old days, if you ever found yourself in a photograph it had been because someone else was behind the camera.

But once again, thanks to technology, if you want to take a picture of yourself, you can now do it without any assistance by either using a smart phone or webcam.

And once these selfies, defined as a photograph that one has taken of oneself, have been captured, many are then posting them on social media sites.

In fact, last year, the Daily Mail website reported 24 billion selfies were uploaded to Google. This total did not even include the number of selfies kept on Apple’s iCloud, posted on Facebook, Snapchat, Twitter or Instagram.

So why are we in love with selfies?

One study I found on psychologytoday.com concluded there were six categories of why people take selfies.

The categories included attention seeking, mood modification, self-confidence, social competition, subject conformity and environmental enhancement, which is taking selfies to create memories or trophies of oneself.

We have seen of late in some cases the latter can become deadly, as folks hang off the edge of waterfalls, get too close to train tracks or try to get “the shot” while driving or flying a plane.

To date, it is reported that there have been 250 selfie-related deaths since 2011.

Also, in this age of selfies, the act of continually taking and posting one’s picture has even become a mental disorder.

In fact, the American Psychiatric Association has coined the condition as “Selfitis.”

I certainly have plenty of diagnosable ailments, just ask hubby, but fortunately selfitis is not one of them.

Now, I am not saying I don’t ever have pictures taken of me, which are then posted on Facebook. I am implying there are just a small number of shots I would want anyone to see.

I mean I am just as vain as the next woman, and having a bad picture plastered all over kingdom come does not help my confidence.

My girl children say there are certain ways to stand and smile and hold your head to look better in a selfie. Admittedly, I have tried practicing these tips, but to no avail. So, all photos were deleted.

And while I have yet to figure out how to look my best in a selfie, I am amazed at the little ones who already know how to pose and tilt there head just right for the camera.

I was at the Miss Mississippi’s Outstanding Teen Pageant a couple of weeks ago, and let’s just say, there were no shy subjects of any age, even though attsavings.com reported Mississippi was last when it came to selfies.

I don’t know about you, but I’m not exactly seeing this as a bad thing.

Whether good or bad, the act of taking selfies is here to stay, at least for the time being.

Just not all the time.

Terri Cowart Frazier is a staff reporter for The Vicksburg Post. You can reach her at terri.frazier@vicksburgpost.com.